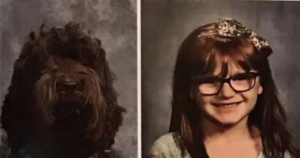 Hadley Jo and her Labradoodle named Ariel are always side-by-side. Ariel even rides the bus and goes to school with her best friend. With the sweet dog by Hadley’s Jo’s side, everything is just so much better.

However, Ariel is more than just a loyal companion. She has been Hadley Jo’s service dog ever since the little girl was two. Ariel can detect seizures before they happen, so it’s her job to protect Hadley Jo at all costs. The fluffy pup does such a great job caring for her human, so recently, she got the recognition she truly deserves.

Hadley Jo had her first seizure when she was only 17 months old. She was in her mother’s arms, so it was a very scary experience for her and her parents. Right away, Heather Lange, Hadley Jo’s mom, knew that she had to do something to help her daughter.

The family soon found out that Hadley Jo has epilepsy, which is a neurological disorder that causes seizures due to abnormal brain activity. That’s when Lange decided to find a seizure alert service dog for Hadley Jo. After careful consideration, she chose Ariel.

“Ariel saves my daughter’s life by alerting us before a seizure happens, allowing us to administer rescue medication in less than two minutes,” said Lange. “My goal is to provide my daughter an independent life as much as possible and Ariel helps to make that happen.”

Lange noticed that Ariel’s seizures seem to happen more often at school. Critical thinking and deep concentration seem to trigger them more than anything else right now. Luckily, Ariel is always there to alert people of a seizure before it occurs.

Everyone at school has gotten to know Ariel very well over the years. They agree that the dog was just as much a part of their class as any other student. So, when Hadley Jo got her yearbook after graduating this year, her family found a heartwarming surprise.

There, listed right beside Hadley Jo’s photo, was Ariel. Ariel is currently the only service dog at the school, so Lange hadn’t expected her to get her own yearbook photo.

“That was pretty unique and pretty special to pick up our yearbook and see our service dog featured with our daughter,” said Lange. “It’s very heartwarming and touching that you see this inclusiveness where not everybody looks the same.”

Ariel has made life much better for Hadley Jo and for the whole family. She serves as both a protector and a best friend for the little girl. She might not have to study or take tests, but she is definitely a part of the school.

Service dogs are expensive, so the family had to fundraise and reach out to the community to help pay for Ariel. Now, their goal is to help make it easier for others to get services dogs too. They created the Hope for Hadley Jo project to assist families with children who have epilepsy, and donations are always welcome.