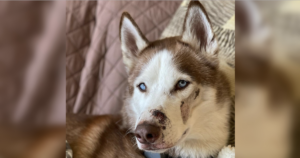 WARNING: Content and images may be sensitive to some readers.

When you leave your dog with a sitter, it’s important to choose someone you trust. Sadly, like many other dog parents, a man on TikTok learned that the hard way. He uploaded a series of videos explaining the horrific situation that his dog went through.

He left his Husky named Grover with a Rover sitter, but when his dog returned, he wasn’t himself at all. Grover looked like he’d been beaten up and traumatized after a weekend with the sitter. Now, his human is demanding justice.

Weekend Away Becomes a Nightmare

Grover’s human went out of town for less than 72 hours, so he left the pup with a Rover sitter while he was away. Not long after, he began getting some questionable messages from the sitter, but he tried not to worry about it too much.

“Hey! Did you say Grover had separation anxiety?” the sitter sent in a text. “I went for a workout this morning and came back and he rubbed part of his nose raw on my door and scratched it up a bit.”

The sitter added that Grover had never done anything like that before. Then, they pointed out that their door could easily be fixed instead of focusing on Grover’s health. At the time, Grover’s human assumed this would be a small scratch, but when he picked Grover up, he was horrified.

Not only did Grover have a scratch on his nose, but he also had puncture wounds and what appeared to be a massive burn on his head. He also lost four pounds. Poor Grover’s personality was gone as if he’d been traumatized. He refused to eat or drink at first.

After looking at Grover more closely, his human texted the sitter again, questioning the dog’s severe injuries. He asked why Grover looked beaten up, and the sitter repeated that he rubbed his nose raw trying to get into the other room. When Grover’s dad asked about the puncture wounds, the sitter claimed they never noticed any holes or punctures.

“Are they deep holes? I just don’t see anything in the house that could’ve actually punctured him since he didn’t rip a big portion of the wood off or anything,” the sitter responded.

They also sent him a photo of the scratched doorway, saying that only a little blood was on it. Since the sitter didn’t seem willing to confess to anything, Grover’s dad decided to do more research.

He found another review from a user who had a similar bad experience with the sitter. The review claimed that the sitter cared more about working out than taking care of dogs. That person’s dogs were also returned in horrible condition, just like Grover.

Grover isn’t the only dog to be injured by a Rover sitter. Many dogs have gotten lost or passed away under the care of a sitter on one of those sites. So, Grover’s human is urging everyone to share his social media posts to make his story viral.

Every day, Grover makes small improvements and starts to act a little more like himself. He’s now eating, playing, and even making silly Husky sounds like before. He still hasn’t gotten all his energy back, but he’s slowly healing and improving.

Grover’s dad hopes this story urges others to be careful when choosing a pet sitter. If possible, find a friend, family member, or someone else you trust to watch your dog. He says that relying on websites like Rover and Wag isn’t worth the risk.