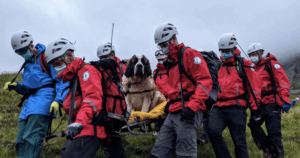 Saint Bernards are known for rescuing people from the mountains. They have a great sense of direction and their coats are able to withstand extremely cold temperatures. They’ve been known for their brave rescues since the 18th century. However, not every Saint Bernard today uses those exceptional skills.

Daisy the rescued Saint Bernard was embarrassed when she wasn’t able to save her own family. Instead, she was the one who ended up needing rescuing from a steep mountain. Luckily, humans came to save her.

Daisy’s family contacted the Wasdale Mountain Rescue Team to save the four-year-old rescue pup. They had been hiking on Scafell Pike, the tallest mountain in England. During their descent, Daisy collapsed. She appeared to have pain in her legs and she refused to walk any further.

The team said that they had never rescued a Saint Bernard before, but they rushed to the scene anyway. Daisy is about 121 pounds, so she’s smaller than the average Saint Bernard, but she’s still very heavy. It took 16 team members to successfully carry the pup to freedom.

“Daisy was in fact a rescue dog and extremely placid and compliant, which was a bonus for the stretcher-carry off the mountain,” said a team member.

Before taking any action, the team contacted a vet to find out what pain medication to give Daisy. Then, they had to gain her trust before putting her on the stretcher. They coaxed her with treats and adjusted the stretcher to make it dog-friendly. In no time, Daisy comfortably rested on the stretcher once she realized the team was there to help.

Carrying Daisy on the stretcher was no easy task. The rescuers had to walk down steep inclines and even maneuver around obstacles like waterfalls. The rescue took about five hours, but it was definitely worth it.

“Having team members with their own pampered pooches at home, and also our very own much-adored search dog, Jess, we recognize the distress that both an animal can feel and also that of their owners,” said a spokesperson.

Thankfully, the team was able to bring Daisy to safety with very few complications. She seems like she will be just fine, but the rescue team joked that she must be embarrassed that she was saved from a mountain while the roles are usually reversed. But even heroes need help at times too.

The Wasdale Mountain Rescue Team does a lot of incredible work for animals and humans alike, but they rely heavily on donations. Please consider donating to help them fund rescues like this one.