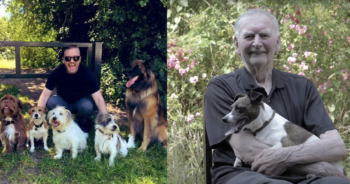 An 85-year-old man known as Donal Rogers is at risk of losing his beloved furry friend. His 5-year-old Jack Russell Terrier named Kim has never shown any signs of aggression before, but a recent interaction ended with her biting a stranger.

One Mistake Puts Life at Risk

Sadly, one dog bite can lead to canine euthanasia, even if the bite was justified or a one-time offense. Like many others in this situation, Rogers never thought Kim would bite someone. The little Terrier is his best friend, and he can’t imagine life without her.

Rogers, a former member of the Irish police force, had Kim outside when she unexpectedly bit a woman walking by. A Twitter user said this was the woman’s third time getting bit by a dog, and she had the first two put down. So, she immediately tried to have Kim put down too. Yet, Rogers said Kim hasn’t bitten anyone before or since the incident.

Rogers said he tried to reason with the woman four times, but she always refused. He offered to keep Kim in a fenced-in area when outside, work with a dog behaviorist or keep a muzzle on her in public. But no matter what he suggested, she refused to budge. The only way she’ll be satisfied is if Kim is euthanized. The court dates have been very stressful for Rogers.

“I have a heart condition, and I have a pacemaker fitted. I was brought in for a checkup on the pacemaker last week and they were able to figure out from the reaction of the pacemaker on the days of the court, the pacemaker reacted and went faster,” Rogers said. “I am unable to sleep, especially in the early morning.”

Many people have shared this story on social media and raised money to help Rogers, but there’s not much he can do without the woman having a change of heart. One Twitter user even reached out to Gervais since he’s such a big animal advocate. He shared the post, hoping it would help.

“This is so sad and frustrating. Anyone out there know how this dog can be saved?” Gervais wrote on Twitter.

The fundraiser is now closed, but people are still spreading the word to save Rogers’ dog. Kim and Rogers have lived a peaceful life before this incident, and they just want to return to the way things were. Kim sleeps at the foot of Rogers’ bed and she has won several local dog shows. She’s a huge part of Rogers’ life, and he says he’ll miss her terribly if she’s put down.

Of course, no one is saying the dog bite is okay, but most dog lovers agree that Kim and Rogers’ lives shouldn’t be ruined because of it, especially when Rogers is willing to do whatever it takes to keep Kim alive. Hopefully, the court will listen to the pleas of Rogers’ supporters, including Ricky Gervais, so Kim can keep living beside her best friend.

The post Ricky Gervais Fights To Save 85-Year-Old’s Terrier From Euthanasia appeared first on iHeartDogs.com.