Rescuer Promises Lonely Ram, “I’m Going To Get You Out Of There” 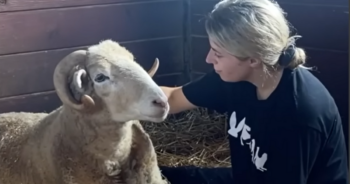 Visitors to the petting zoo where Huxley spent the first 10 years of his life referred to him as “The Depressed Ram.” He was completely alone and miserable with no other animal friends for company. Confined to a pen with no shelter, Huxley had utterly given up on life.

The lonely ram came to the attention of Ryan at Uncle Neil’s Home, a sanctuary in New Jersey for rescued farm animals. She visited him frequently, watching through the fence as he suffered and promising, “I’m going to get you out of there.”

The people at the petting zoo did not feed Huxley a proper diet, and visitors often threw food over the fence to him. As a result, he became very overweight, developing osteoarthritis. Footage Ryan shot of Huxley’s time at the zoo shows him limping painfully, falling over, and spending most of his time laying against the fence, alone and in pain.

Ryan and her friends at Uncle Neil’s Home submitted an urgent proposal to the county commissioner to have Huxley and two other critical animals released from the zoo into their care. Ryan longed to give Huxley the medical care he needed and ensure that the rest of his life was spent in comfort in happiness. Thoughts of him suffering out in the cold kept her up at night.

On December 23, 2021, the county commissioner announced they would release Huxley to Ryan and her team. Even though it was Christmas Eve, she was there the very next day to pick him up.

It was a whole new experience meeting Huxley without a fence separating them. The ram was clearly starved for attention, so Ryan knelt with him in the straw, trying to express through her eyes and her touch that he was finally safe. When bedtime came that first night, Ryan found herself overcome with emotion as the thought dawned on her: this was the first time Huxley would sleep on a warm, comfortable bed.

It took Huxley a while to realize that the love and respect he was enjoying at Uncle Neil’s Home was truly his new reality. But as each day passed with healthy food, fresh water, and kind treatment, the ram slowly began to trust in his good fortune.

“I really do think that he knew that he was safe, Ryan said. “And it really proved to us that love heals.”

Soon Huxley began to exhibit a “new zest for life.” He started spending time around the other lucky rescue animals. At first, he kept his distance, lurking nearby but afraid to join in and socialize. But eventually, he formed a bond with a black and white ewe named Josephine, who became his BFF.

Huxley still suffers from several health problems as a result of his poor treatment at the petting zoo. He goes to the vet every six months for steroid injections to treat his osteoarthritis. He is on a strict medication and supplement regimen and gets daily laser therapy to soothe his joints.

In addition to the exceptional physical treatment, Ryan also ensures that Huxley is nourished spiritually. She spoils him with his favorite snack: bananas, and spends hours sitting with him under a cherry tree, lovingly scratching his neck.

“Huxley stole a piece of my heart that he will forever hold with him. I can’t stop smooching his face,” she said.

While Ryan loves all the animals at the farm, Huxley is the one that “connects to her soul.”

The post Rescuer Promises Lonely Ram, “I’m Going To Get You Out Of There” appeared first on iHeartDogs.com.