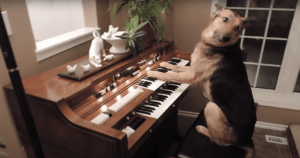 Children love learning new talents, and playing the piano is one of the most popular skills out there. So, it makes sense that dogs would have an interest in playing instruments too. Sadie the German Shepherd and Border Collie mix has dreamed of being a professional pianist all her life. Now, her mom has finally let her have a chance in the spotlight.

In a viral video, the 6-year-old rescue pup shows off her impressive piano skills. She only plays a 30-second song, but it’s so good that it leaves viewers wanting more!

Sadie lives in Canada with her family who adopted her from a local shelter. The lovable dog has always been interested in learning new tricks, so her mom thought it was time to try something special. Thus, she filmed her curious pup putting her music skills to the test. The song is a little rocky, but everyone has to start somewhere. Plus, she plays the piano better than some humans can.

Sadie starts off her performance by jumping up on the piano bench and turning the piano on. Then, when her mom asks her if she can play the piano, she sits down politely. She carefully puts one paw on the keys at a time, creating the beginning of a beautiful performance.

Soon, Sadie feels confident in the spotlight. She taps on the keys excitedly to continue the music. Everything seems to be going smoothly, but then she hits a wrong note. Instead of brushing it off and continuing the song, she becomes embarrassed. She covers her face with her paw in shame, but her mom encourages her to keep going.

So, Sadie tries again, but only moments later, she makes another mistake. Once more, she hides her face in shame. Again, her mom tells her that it’s okay. Mistakes happen, so there’s no need for her to worry about it.

Finally, Sadie ends her performance with a bow. If there had been a live audience in front of her, they would’ve gone wild. After all, she clearly has enough talent to be a professional piano player.

Whoever said that you can’t teach an old dog new tricks has never met Sadie. Dogs love to learn, and clearly some have career goals just like us. So, hopefully Sadie will one day achieve her dream and get to play on a real stage. The tickets for her show would sell out for sure.