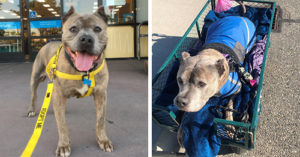 Mugzy’s story is a perfect example of how one little kindness can change a life for the better. He’s what we mean when we say that a dog lived “happily ever after.”

In the summer of 2017 Kelly Duer was participating in a study on foster care sponsored by Maddie’s Fund. As part of her study, she would take a dog out of his kennel for a nice day away from the shelter, and an overnight stay at a hotel. Mugzy was one of those dogs.

Mugzy had been living at the shelter longer than any of the other dogs at Ventura County Animal Services. Life hadn’t been easy for him, and Kelly felt if anyone deserved a day out, it was Mugzy.

He had crudely cropped ears and a disease that caused some mobility issues, but he soaked up affection like a sponge and was especially fond of belly rubs! Kelly happily snapped a few pictures of Mugzy while they were out, showed him some love, but unfortunately, their day came to an end and she had to return him to his kennel to continue her research.

She posted the photos from their big day to IMGUR, where I spotted the thread and read his story. We at iHeartDogs were all so taken by his big, happy smile while standing outside the door of the pet supply store that I reached out to Kelly and asked to share the photos. She sent more and told us the story about this beautiful pittie.

Kelly’s day with Mugzy had been his first time away from the shelter in over 500 days. He loved visiting the pet store, curling up on the couch in the hotel room, but most of all, he loved the affection he got from the people he met that day.

Mugzy charmed our readers, too. His post was shared over 1,000 times on Facebook – and reached Orinda Beiers with the Hearthfire Animal Rescue Team in West Richland, Washington.

“Mugsy called out to Orinda from a shelter near LA. We’re not sure why we had to spend four days on the road to fetch one bedraggled old pit bull. It’s not as though there’s a shortage of bullies, or old dogs, right here. But he’d been waiting nearly two long years, and it was … necessary.”

HART arranged to pick him up, and they immediately made their way to Southern California to bring him home. They were determined that Mugsy never spend another night in a shelter kennel. He became a Final Refuge dog with HART, and his foster mom fell in love with him and decided to give him a home for the rest of his life.

Mugsy was a member of HART’s family, and through frequent Facebook posts and photos, kept his fans aware of how he was doing. He received all the medical care he needed through their Final Refuge program. Kelly followed his story too, and donated to help with some of the expenses.

Mugsy thrived with HART, and fell in love with his new home and family. For two years he lived the good life, with plenty of friends, his own spot on the couch, a foster sister, and lots and lots of love. We were so sorry to hear that just yesterday, December 2, 2019, HART said goodbye to Mugsy.

We said goodbye to Mugsy today, and our hearts are sore. It seems a good time to think back over the past two-and-a-half…

In Mugsy’s beautiful memory, they shared some of their favorite moments on Facebook:

“Mugsy didn’t have too many teeth, but he could wrassle any zucchini to the ground.

Summer was always his favorite time of the year … except during autumn, winter, and spring … because ANY time spent on grass or a comfy cushion or a willing lap or in the backseat of the car, head hanging out of the window and jowls flapping in the breeze – basically, anywhere out of the shelter – is a GREAT time for an old dog!”

“Sometimes, when life was too good and he got to forgetting that it was a serious matter, he had to be tortured. Like this time when his people made him dress up as a turkey. Look, Mugsy had far too clear a sense of his own self – he knew his worth. But seriously … a TURKEY? Poor dog!

“Mind you, he never felt sorry for himself. Fiercely loyal, he took his job of keeping his people safe seriously. There wasn’t a treat or a bowl of food he didn’t glom down with energetic enthusiasm. From the moment he left the shelter, he grabbed hold of life with gusto and lived every moment he had!”

“Days were spent indoors, He was allowed on the couch with the special dog cover on it. He was not allowed on the “clean couch”. His Momma would pile various things onto the couch to help him remember … and as far as Mugsy was concerned, they just made couch time more interesting.

“The thing about this guy was, he liked to make his humans happy. He really WANTED them to be happy. But he never really bought into the notion that doing what he was told was the way to accomplish that end. For Mugsy, commands were merely suggestions. Sometimes he took them … and sometimes he didn’t. His Momma worked around this by keeping him in a harness most of the time. It was comfortable enough for him, and it meant she had a handle when she needed to grab hold and make him mind.”

“Mugsy LOVED his daily walks. He never went far – his arthritis was bad, and over time it got worse, to the point where even medication wasn’t really helping. Going out to his special pooping spot a short way down the road became difficult. So … he got a chariot. Sometimes he didn’t need it, and that was fine – Momma or Grandma Orinda would take it along anyway. But usually at some point he’d berelieved to climb aboard and let the humans do the walking.

“We’ve known for a while that he was getting ready for his last journey across the Rainbow Bridge. He was ready … but truly, the people who loved him were not. His Momma, Grandma Orinda – all his people – wanted so much to give him just a few more days, and then a few more, to snuffle around and guzzle treats and snuggle in blissful comfort. But it was getting too hard for him.

“Today when the vet came to visit, he was happy to see her. For a short while, greeting her, he seemed like his old self. But he wasn’t, really. His battered old body was tired, and it was time to let him go.

“He crossed the bridge with his tail high and his jowls flapping in the breeze. We miss you, sweet boy.”

It took a lot of people to give Mugsy his happily ever after. We’re thankful for Ventura County Animal Services, Kelly Duer, Orinda Beiers and HART, Mugsy’s family, and every single one of our readers who shared his story.