Rescue Is Determined To Get Injured, Abandoned Dog Back On His Feet 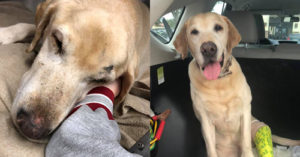 A pair of unrestrained canine brothers, 6 month old “Dale” and 5-6 year old “Brennan” (yes, as in “Talladega Nights” best buds,) took a jaunt together one day in December. On their trip, a car struck Brennan, badly injuring him. Dale refused to leave his suffering brother’s side. That’s how Pasco County Animal Services found them, side by side in the road.

Foster organization Maxx And Me Rescue wrote on Facebook about the trauma these dogs suffered together. Brennan especially suffered severe physical injuries.

“PCAS picked up these two wayward souls and brought them to their shelter. Brennan was unable to stand and in a tremendous amount of pain. He suffered various injuries to his leg: Obliterated ligaments on the inside and outside of his knee, his knee cap is completely unrestrained so it’s floating freely in that space… he has abrasions on every limb and his head.”

Dale was unhurt and just wanted to see his best buddy again. Maxx & Me Pet Rescue determined that whatever happened, these two brothers and close friends needed to go home together.

Abandoned In His Time Of Need

Eventually, the people Dale and Brennan belonged to were notified and came to claim the dogs. When they saw Brennan’s condition, they made the decision to bring Dale home and surrender Brennan.

The poor dog, in terrible shape, had now been abandoned by his family and lost his best friend.

Brennan suffered inflammation in his spine and zero strength in his rear legs. He became frustrated that he couldn’t move his own body freely and that he had to be confined. The poor guy had to be fully sedated for the vet to obtain X-rays. Still, Brennan remained friendly throughout the whole process. What a saint!

“Through it all – pain, confinement, isolation, abandonment, unfamiliar people and surroundings – he allowed doctors to poke and prod and manipulate his sore and aching body, and yet remained calm.”

No Matter The Cost

Maxx & Me Pet Rescue took Brennan to see several specialists and were even told the costs were too high and Brennan should be euthanized. They refused to let either of those things become obstacles to getting this dog back on all four legs.

“It broke our hearts to hear he was hurting and in need and left behind alone. We committed to Brennan and promised him every effort we had to help him. It was recommended we euthanize him before he ever saw a specialist. We were counseled that the cost associated with helping this old boy was just too much for a single dog. We stayed the course. We hoped. We researched and called around and coordinated efforts to find someone willing and capable to help him. We found that today in Dr Hay.”

Though his knee would need to be basically rebuilt, at last a doctor agreed to take on the challenge. The Rescue repeatedly insisted how worth it all of the money and effort spent on Brennan is.

“Brennan, our boy, you are so loved. You’ve been worth every effort given, every dollar spent, every tear shed. The love and appreciation in your eyes is more than adequate repayment. You are a true testament to our rescue. It mattered to you. You matter to us.”

Sweet Brennan is on his way to recovery, Maxx And Me Rescue shared on December 18th. After hours of surgery with Dr. Hay and her team of specialists,  he begins a period of rest and rehab.

“Brennan is now on his road to recovery. Being 100 pounds and obviously needing the knee to stand and walk and function, Brennan is sure to have long road to healing and even some ups and downs along the way. But the team behind this brave boy is confident (including Dr Hay!) that Brennan is capable of living a long, happy, high quality of life after this. It’s all we wanted for him.”

The faith and love of these dedicated volunteers and talented specialists saved the life of a dog with everything against him. Hang in there Brennan, you are adored!

The post Rescue Is Determined To Get Injured, Abandoned Dog Back On His Feet appeared first on iHeartDogs.com.