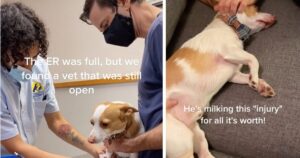 Do you ever look at your spoiled, precious little dog and wonder how they could have descended from wolves? Some dogs you just can’t imagine ever surviving outside of a home without access to pillows and climate control. They are spoiled, needy, and downright dependent, but we love them anyway.

A viral video from this week stars one of those sweet, delicate little dogs. The Tik Tok tells the story of an injury he received at the dog park and his cute and hilarious way of handling it.

The little dog, recognizable for his pointy and ever-visible upper teeth, goes by “sharkybobarky” on Tik Tok. His real name is Jaqweenie, and as we learned from that viral video, he’s quite the dramatist.

Jaqweenie’s mom/curator of his Tik Tok account started the video with this description over a video of the dog lifting his paw:

“Jaqweenie hurt his paw at the dog park. He was so upset I thought it might be broken.”

Many of us know there’s no sadder sight than a wide-eyed dog walking with a limp (especially when it’s your baby.) The next segment of the video explains they went right to the vet. The vet tech takes Jaqweenie’s blood pressure and examines him while his parents stand nearby.

Poor Jaqweenie’s face retains its traumatized expression throughout the video. Even as, in the next frame, we learn the injury plaguing this dog is only a tiny little cut on his paw. A small bandage and a big bill later, the theatrical dog is completely fine.

From the way Jaqweenie carried on, you would have expected a much worse diagnosis. The video’s next caption summarizes:

“Milking The ‘Injury’ For All It’s Worth”

Even after he returned home from his vet visit, Jaqweenie insisted on being carried. He also took his time walking from the couch to his food bowl. Maybe he was being dramatic, or maybe he just loved all the attention being “injured” got him. Or, maybe paper cuts really hurt, okay??

Of course, who could stay mad at that face? Jaq’s mom put a positive spin on it too:

“Bless his heart. I guess I’m glad he’s become so  sheltered that a tiny cut rocks his world.”

Watch the original video below:

The video of Jaqweenie’s dramatics has been viewed over 1.7 million times on Tik Tok, which also means it made the rounds on other social sites. Some people shared stories about their own dramatic pooches and delicate dogs.

“When my dog was a puppy I spent $300 at 4 am to have the vet tell me she was sneaking extra helpings of kibble and too full to walk.” – @Fun-atParties via Reddit

“My dog does this but always forgets which injured leg it is.” – Naomi via Tik Tok

Others feel like Jaqweenie’s attention-seeking reminds them more of themselves.

“This is exactly how I act when I get a paper cut. I feel seen.” – Lynsey via Tik Tok

And then, of course, there’s the cat person perspective:

“Meanwhile my cat stepped in a lit candle and acted like nothing happened.” – Erin via Tik Tok

Follow @sharkybobarky on Tik Tok for more of Jaqweenie’s histrionics. He’s also on Instagram under the same handle.