Reggaeton Loving Beagle Gets His Groove On 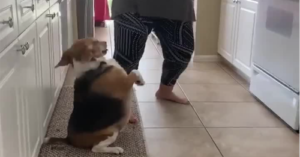 They may not have the opposable thumbs or pouting lips that playing instruments requires, but dogs can still get into music. They just tend to do better on the movement side. At least, a dancing Beagle named Bailey certainly does.

Bailey grooved his way to stardom this week with an absolutely enchanting music video. A videographer we’re all extremely grateful for captured the pup enthusiastically dancing to Reggaeton music with his person. IT’S SO CUTE.

Wendy Berenguer shared the video of Bailey on Facebook. The numbers this video reached are staggering. It surged to 463,000 likes and over 1.3 million shares.

With this level of engagement, most of the video’s comments are from dog-loving people tagging other dog lovers. Some are just expressing a desire to teach their own dogs how to twist. Others insist Bailey just has an itchy butt (no way, those are clearly moves.)

At the beginning, the videographer approaches this little dance recital secretly. It almost seems like she’s worried she’s going to interrupt it with her presence. Fortunately, that wasn’t the case.

He loves the attention! With a new audience for his moves, Bailey gives us a different angle. The show must go on!

This dancing pup has some endurance. It looks like he could do this all day! His human co-star probably could too.

What’s next for Bailey I wonder? ‘Dancing With The Stars?’ His own dance studio? A line of Bailey-endorsed dancercize tapes? I can’t wait to find out!

You can (and absolutely have to) see the entire video below:

There’s plenty of evidence to indicate at least that dogs have different musical preferences. In a study at Queens University, researchers studied how dogs react differently to particular types of music. Psychologist Deborah Wells observed when they listened to either a compilation of popular music, classical music, or heavy metal rock. The heavy metal music made the dogs agitated and even caused them to bark. Classical music had a calming effect on them.

“It is now believed that dogs may be as discerning as humans when it comes to musical preference.”

While the concept of dance may technically be uniquely human, it’s possible that doggie dance moves like this are pups imitating their people. In short, virtually all animals can perceive pitch, but not all can understand rhythm.

If there is one thing this video proves definitively, it’s that dogs make great video subjects.

The post Reggaeton Loving Beagle Gets His Groove On appeared first on iHeartDogs.com.