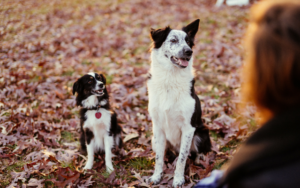 There’s something about a dog’s soft fur and kind eyes that works like medicine when you’re feeling down in the dumps. Making you feel better seems effortless for them, but a new study suggests their mood-boosting powers aren’t as incidental as we used to think. The question of whether or not dogs feel empathy is still yet to be answered, but researchers recently published a study that suggests dogs are receptive to human emotional states and can choose to actively help when they sense a human in distress.

To start the experiment, 34 dogs and their owners were split into two groups. The dogs were of all different breeds, sizes, and genders, and around half of them were nationally certified therapy dogs. The goal of the experiment was to see if dogs responded to their owners faster when they thought they were in distress than when they thought they were feeling good. For both parts of the experiment, the dogs were placed in a rectangular room connected to another small room with a Plexiglas door. Behind the door, which was attached to a frame with magnets and easily opened, the dog’s owner sat appearing to be trapped. In the first group, the owners were instructed to hum “Twinkle, Twinkle Little Star” while occasionally saying the word “help” in a normal tone of voice. Researchers observed the dogs’ body language looking for signs of stress and monitored their heart rate. They also timed the experiment to see if the dog decided to push past the magnetic door to reach their owner. In the humming group, nine dogs opened the door, and it took them an average of 96 seconds to decide to do it.

In the second group, the dogs and owners were placed in the same adjacent rooms, but this time, the owners were instructed to feign distress. They made crying noises and called out for help in their best come-save-me tone of voice. This time, a similar number of dogs decided to open the door to get to their owners, but the key point in the research was how long they took to make that decision. On average, the dogs with distressed owners took only 24 seconds to push past the magnets and approach their owners. The significant time difference between groups leads researchers to believe the dogs with distressed owners were acting on feelings empathy.

Besides timing, heart rate and behavioral signals also suggested dogs are capable of interpreting human emotion. Researchers found the dogs that opened the door for their crying owners showed significantly lower levels of stress than the dogs that did not open the door. These results support the theory that in order to be a good helper, dogs (and people too) need to be able to control personal stress. For the dogs with humming owners, there didn’t seem to be any difference in stress between the dogs that opened the door and those that didn’t.

“The idea is that if you can perceive someone else being in distress but it doesn’t overwhelmingly stress you personally, then you’re more likely to be able to provide help.”

The small scope of the study and the fact researchers couldn’t actually look into a dog’s mind to determine their motivations for opening the door limit any concrete answers in terms of dogs and empathy, but the study does point us in a direction to better understand our canine companions. Police dogs, search and rescue dogs, therapy dogs, and even house pets with strong bonds toward people have all shown real-life evidence of wanting to help people. Science is getting closer to giving dogs all the credit they’re due.