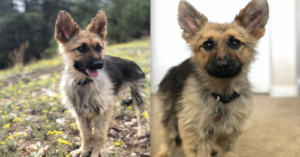 Ranger the German Shepherd might look like a puppy, but he’s actually two years old! When his mom, Shelby Mayo, first met him, she knew he was smaller than he was supposed to be, but she didn’t think much of it until he got older. Sure, he’s adorable, but being puppy-sized forever also comes with a lot of health issues. Luckily, Mayo is willing to do everything it takes to keep him happy and healthy.

When Ranger was very young, he had a parasite called Coccidia. Mayo assumed that this was what was causing his late growth spurt, but even after the parasite was treated, her sweet dog was still having some health problems.

He later got another parasite called Giardia, which developed an infection around his neck. This was also treated, but the poor pup was still far smaller than he was supposed to be.

Through all the vet visits and treatments, Ranger remained very small. So, the vet suggested that he could have pituitary dwarfism, which is a rare genetic mutation. This condition primarily affects German Shepherds, but it can also occur for other large breeds such the Saarloos Wolfdog and the Karelian Bear Dog.

Even after the vet told her this, Mayo was still skeptical since the condition is so rare. However, by the time Ranger was neutered, Mayo began noticing things that confirmed the vet’s suspicions.

Mayo began to see big changes with Ranger’s health as he got older. She noticed that he was losing weight, he was losing hair more frequently, and he had dry and flaky skin. Mayo knew that this wasn’t normal for any dog, so she started to worry.

Another parent of a German Shepherd with dwarfism reached out to Mayo when they heard about these symptoms. They suggested that Ranger might be suffering from low thyroid levels, which is common for dogs with dwarfism. Mayo took Ranger to the vet and sure enough, the vet confirmed that his thyroid levels were low.

Now, Ranger is as happy and healthy as can be. Mayo is aware that he might have a shorter lifespan and more health issues than other dogs, but she loves him more than anything. He has a great life and he gets along well with his two dog siblings, Hazel and Jessie.

Ranger is a brave dog that has stolen the hearts of people all over the world. He even has his own Instagram page where Mayo posts adorable photos of him on a regular basis. He has over 75,000 followers so far, and that number will likely continue to grow because it’s so hard to resist that adorable puppy face!