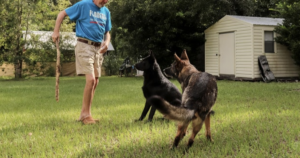 In the moment, 68-year-old Lothar Weimann claimed he was fine. Yet, his German Shepherd named Ellie sensed otherwise. Somehow, she knew he was having a stroke before he did. Judging by the bump on his head afterward, Weimann had fallen, so Ellie jumped into action and got the neighbor involved. Thanks to Ellie’s quick thinking, Weimann’s life was saved.

It’s unclear how the dog knew to look for help, but she certainly did the right thing. This situation further proves that the bond between a human and their dog is something truly special.

Weimann’s wife wasn’t home when he fell, so he had no one to call for help. As soon as Ellie realized something was wrong with her human, she ran off and opened at least three gates to get to Dan Burton, their neighbor. She barked repeatedly until Burton came out by her.

Assuming the dog was lost, Burton walked back to the house with Ellie. But when he arrived at his neighbor’s home, something felt off. He could tell something was wrong with Weimann, just like Ellie had.

“He’s not his usual self. He doesn’t know my name. It’s almost like, you know, a stroke of sorts,” Burton explained.

However, Weimann didn’t think anything was wrong at the time. He walked around, insisting that he was feeling fine, but Burton tried to get him to sit down and rest. Burton called 911 and explained the situation to them. Within 40 minutes of when the stroke started, help arrived. They rushed him to the hospital as quickly as they could.

Unfortunately, Ellie and Weimann’s other German Shepherd named Willy had to be locked away as paramedics took their dad to the hospital. But thanks to Ellie’s quick thinking, Weimann was safe. When Weimann arrived at the hospital, he was conscious and breathing but was soon diagnosed with heart problems and Type 2 diabetes.

Later, doctors confirmed that he had a stroke. Weimann said he is very grateful for Ellie because he might not be alive today without her help.

“A dog is always a very honest, very true kind of character,” Weimann said. “I will always say that dogs are the better humans. It’s good to have them around. If you have a dog, you have a companion for life.”

We never know what our dogs are capable of, but oftentimes, they surprise us. They’ll do whatever they can to keep their humans safe because that’s how much they love us. Ellie truly is a hero!

The post Quick-Thinking Canine Has Life-Saving Reaction To Her Dad’s Stroke appeared first on iHeartDogs.com.