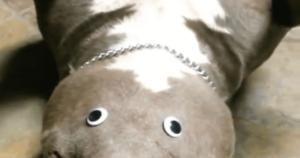 Pit Bull lovers know all about those floppy Pittie lips. Those droopy things tend to flap all over the place when a Pittie runs, jumps, and rolls around. They look especially adorable when the dog lies down.

One gray and white Pit Bull who likes to lie on his back inspired his person to make art. All it took was two craft-store googly eyes placed gently underneath the Pit’s chin. These little additions turned a floppy-lipped back-sleeper into… some sort of bizarre new species! From this angle, the pink of his exposed lips form sort of what looks like a large tongue.

A video of the upside-down pup humorously identified him as a “new breed, very exotic.”

I still cannot stop laughing looking at… whatever this is! And I definitely am not alone in this reaction. People jumped into the comments section across social media to take guesses at what this upside-down, googly-eyed beast is.

“Some kind of weird crocodile or similar marsupial!” -@vanhouten64 via YouTube

“This is an upside down walrus hound.” – Wayne Kilthau via Facebook

While I think these are all decent assessments, to me the “exotic species” looks most like a gray and white eel wearing a necklace.

Watch the disturbingly funny footage for yourself over and over again here:

Isn’t it great that our dogs can provide us with so much entertainment even when they’re asleep?

Why Do Some Dogs Sleep On Their Backs?

If your reaction after laughter was “hey, my dog sleeps like that too,” you might wonder why that is. It may be that your dog is just a little weirdo. But scientifically, it could be your dog’s way of keeping themselves cool. The layer of fur on your dog’s stomach is a lot thinner than the fur everywhere else. Since dogs only sweat through their paws, lying on their backs with their bellies exposed is one way to cool down.

Of course, this looks so silly to us because this sleeping position is not observed in the wild. That’s because it would leave wild animals in a vulnerable position. Your pup feels safe enough at home with you to let their guards down!

They don’t even seem to mind being left vulnerable to googly eye “attacks.”