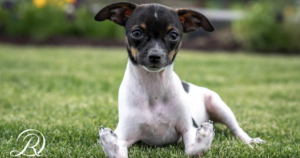 A tiny Rat Terrier named Siggi had a rough start to life. The puppy was born with upside-down front paws, which forced her to walk around on her elbows. While her imperfections are beautiful, her paws likely made her incredibly uncomfortable and would only get worse as she aged.

Luckily, OklahomaState University offered a miracle to Siggi. They were able to provide her with a life-changing surgery that could correct her painful paws. The surgery required a 3-month-long recovery process, but Siggi is finally getting the hang of walking on all fours.

Not long ago, the Oklahoma State University’s College of Veterinary Medicine cared for another dog with upside-down paws named Milo. So, they had some idea of what to expect. Dr. Erik Clary, a small animal surgeon, operated on both Milo and Siggi.

“As with Milo, Siggi’s problem looked like it was in the paws but it was actually in her elbows,” Clary said. “For reasons not fully understood, these patients’ elbows come out of joint early in life and the result is severe rotation of the lower front limbs and an inability to walk. At most, they might muster a crawl that seems most uncomfortable and is poorly suited for a dog’s life.”

Like Milo, Siggi had to go through a complex procedure that involved intentionally breaking part of the front legs to rotate her paws properly.

Luckily, the veterinary team completed the surgery successfully, and Siggi had to wear giant orange casts—OSU’s signature color—while she recovered. She remained under the care of Dallas Dog RRR while she healed.

About three months later, Siggi had a checkup that proved her legs had healed. The college posted videos to their website showing Siggi walking up and down a ramp with her rotated legs. She gets around well despite what she has been through. Every time she practices walking, she gets plenty of treats.

“Lorraine, her medical foster with Dallas Dog RRR, did a fabulous job implementing an incremental rehabilitation regimen that now has Siggi doing many things that puppies like to do, including chasing a ball in the yard,” Clary said. “Truly, I could not be more pleased with Siggi’s progress.”

Dallas Dog RRR is continuing to take great care of Siggi. They haven’t announced if/when Siggi will be adoptable, but it’s great to know that she’s currently in a loving, supportive household with her foster family. If you would like to help out dogs like Siggi, please consider donating to Dallas Dog RRR to help cover medical costs.