Puppy Has To Have Ear Amputated After Haircut At Petco 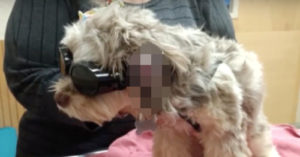 When we take out fur babies to a groomer, we expect them to be returned to us safely. We trust that any groomer charged with caring for our dog in our absence will have the proper training and experience necessary to make decisions the will benefit our dog. At the absolute minimum, we expect them to come back to us whole and unharmed. Angela Weeks recently took her 5 month old puppy Baylee to get a hair cut at PetCo and little Baylee left anything but safe and unharmed.

Angela Weeks did what so many of us have done countless times before. She took her puppy to get a haircut at PetCo. One of the reasons so many consumers take their dogs to large corporate stores for products and services is because we trust that they have strictly enforced guidelines and protocols that prioritize pet safety above all. That violated trust makes stories like this one all the more jarring.

Angela picked up Baylee afterwards and she seemed fine. Her ears were decorated with red bows, which of course looked adorable. Angela paid for the haircut and they went along their merry way. Angela decided to leave the bows in Baylee’s hair because they looked so cute. Little did she know that one of the bows was fastened completely around the puppy’s ear, cutting off circulation.

Three days after the hair cut at PetCo, Angela noticed that Baylee’s left ear was swollen. Upon closer inspection she discovered that the groomer had wrapped the bow’s rubber band around Baylee’s ear, which cut off circulation to it. The bow on the right was fastened to the dog’s hair, not around the ear itself. Angela made a call to the PetCo location and to her veterinarian.

Baylee’s Ear Had to be Amputated

Swollen and painful, Baylee’s ear had suffered too much cellular damage to be viable. The veterinarian determined that her ear would have to be amputated. Baylee had surgery performed on the left ear to remove it. She is recovering at home while Angela continues pushing the issue with PetCo.

The store manager got involved when Angela first called the store to complain. The manager immediately offered to refund Angela’s money for the hair cut and to pay for all medical expenses related to the injury. Records reflect that those promises were kept by PetCo. The groomer responsible for tying the bow around Baylee’s ear has been fired as well.

Angela doesn’t think it is enough, however, and raised the issue with corporate. Angela was reportedly offered $500, which she declined. Angela is still waiting on an acceptable offer from PetCo. The company publicly responded to News Channel 9, saying:

“We regret and take full responsibility for what happened to Baylee after visiting our grooming salon. At Petco, the health and safety of pets in our care is a responsibility we take very seriously.”

“After a thorough review of Baylee’s experience, it’s clear the groomer involved did not follow our animal care and safety policies. That groomer is no longer with Petco. As pet parents ourselves, we understand how distressing this experience has been for Baylee and her family. We’re committed to making it right and preventing this from happening again.”

We will keep an eye out for any updated on Baylee’s condition or Angela’s case with PetCo.

The post Puppy Has To Have Ear Amputated After Haircut At Petco appeared first on iHeartDogs.com.