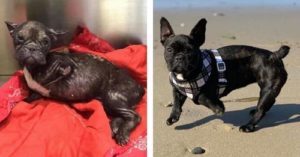 Slaughterhouse Survivors is an organization that is dedicated to the rescue of dogs stuck in the horrific meat trade in China. Thanks to the three amazing ladies who created this organization, Pearl has gone on an epic journey to her forever home in America.

Though animal advocates are fighting to abolish this cruel practice, there are still slaughterhouses present in China.

When three expats living in China (Hayley, Aimee, Emily) rescued their first group of dogs from a local slaughterhouse, they knew they had to work together to start a movement. 3 years later, they are a non-profit organization that works with rescues around the world to rescue and find homes for dogs outside of China.

Pearl is one of the many dogs Slaughterhouse Survivors has brought into their care. When they found Pearl she was suffering from a terrible skin condition, as well as a missing limb for unknown reasons. She was in such poor shape that her rescuers were unsure if she would make it.

It’s clear that she had an incredible will to survive, as she was up and moving in no time! With the help of several medicated baths and plenty of TLC, pearl was ready for the journey of a lifetime. Two months after being rescued, she set off to California with the support of Road Dogs And Rescue.

Once Pearl arrived in her foster home, her personality began to shine. She was so incredibly playful and absolutely loved the company of her three foster siblings. Though she was missing a limb, she did not let that slow her down!

Pearl had found an incredible foster home, but the ultimate goal was to find her a forever home of her own. After months of searching, Road Dogs and Rescue found a loving adopter for Pearl, who happened to be a veterinarian. With the possible need of skilled care in her future, this was the perfect fit for this special pup.

Pearl’s new adopter lived in New York, so the Road Dogs and Rescue crew set off on the road trip that would bring Pearl to her forever home. With already flying across the world, this was a piece of cake for Pearl!

Once Pearl was in the arms of her new mom, Ashley, it was clear that the two were meant for each other. In that moment Ashley vowed to give Pearl the future that she deserved. In addition to the amazing mom that Pearl received, is her furry sister named Janet, in which she found a forever friend.

“Pearl is everything I imagined she would be and more.”- Ashley

Though Pearl has been able to get around despite her missing limb, it’s clear that her injury puts stress on her hips and joints. Because of this, Ashley now has Pearl in pet rehabilitation. There is even talk about Pearl receiving her very own artificial limb!

Pearl’s transformation is amazing and could not have happened without the help of Slaughterhouse Survivors and Road Dog Rescue. Thank you to the dedicated animal rescuers who continue to fight for dogs like Pearl!

The post Pup Rescued From Slaughter In China Flew Across The World To Meet Her Forever Family appeared first on iHeartDogs.com.