Pup Gets “Jealous” Whenever Mom Tries To Kiss Dad 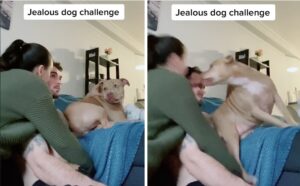 Love and loyalty are two of the best traits dogs possess. Sometimes though, these traits emerge in the form of what can only be described as doggie “jealousy.” At least that’s what I called it when my childhood dog jumped up on the couch and forced himself between my high school boyfriend and me.

Tik Tok, the video-based social app, offered other dog people the opportunity to share their stories with the #JealousDogChallenge. One user, Ashleigh Sparkles, aka Ashleigh Wedd, posted a video of her Staffy-mix Poppy and the dog’s reaction to Wedd giving her boyfriend affection.

In the video, Wedd leans close against her partner, who has his opposite arm around Poppy. Once Poppy finishes licking herself and notices what’s going on, she intervenes.

“My dog thinks she’s my partner’s girlfriend, so she gets FOMO if I show him any affection. She tries to join in by any means necessary.”

Poppy gives her dad a few face licks, almost like she’s proving she’s his number one gal. Even if that’s not real jealousy, it sure looks like it!

“I’m constantly losing at the ‘that’s my bae’ game.”

It wouldn’t be a dog video on the internet if someone didn’t have some sort of problem with the content. For the Pit Bull haters who chimed in to say Poppy bit or attacked Wedd, she had this to say:

“I was the one in the video and have the full [footage,] it was definitely a kiss, she’s never bitten.”

Obviously, the rest of us dog lovers think this #JealousDogChallenge entry is adorable. The video already has almost 35,000 likes and has been viewed hundreds of thousands of times. Other “jealous dog” parents relate.

“When you realize that you are the third wheel.” – Maurico Puentes via Tik Tok

“Some people obviously don’t know what a Pittie smooch is and it shows.” – Prince Sass via Tik Tok

Wedd’s account isn’t technically dedicated to her dog, but she sure shares a lot of cute Poppy videos. Follow her for more on this sweet “FOMO” dog.

Is Your Dog “Jealous?”

Or, maybe you just want to have a laugh about the silly things your dog does to show they love you most.

The post Pup Gets “Jealous” Whenever Mom Tries To Kiss Dad appeared first on iHeartDogs.com.