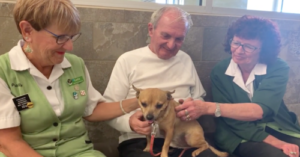 Everyone handles the loss of their dog differently. Some people find it’s helpful to seek new love in another dog. Others just aren’t ready to move on. And sometimes, just interacting with a certain dog can help make those decisions for you.

That’s what happened to a man in Lakewood Ranch, Florida named Bob Eck. His dog Bobo, formerly his best friend, had been hit by a car and killed. After that, his whole life changed.

Eck often brought Bobo with him when he shopped at his local Publix grocery store. The employees there had grown fond of both Bob and little Bobo. One day, they asked about the dog and were heartbroken to learn the answer.

“I asked him how Bobo was and he told me the sad story of how he had gotten hit by a car, so we all cried.”

Two Publix employees in particular, Kathy Clifton and Leslie Hinton, became invested in their long-time customer’s emotional recovery. They initially suggested adopting another dog for Eck, but he wasn’t ready for that.

At the very least, they hoped just going to the shelter to see the dogs would cheer him up. Clifton told WFLA she had to be pretty insistent to even get Eck to visit Bishop Animal Shelter with them.

“Maybe I was stubborn to talk Bob into it, but he didn’t need much coaxing when we started looking at the dogs. And when we saw Peppy, that was it.”

Peppy is a 4-year-old Chihuahua with the superpower of love capable of melting a mourner’s heart. The pup and Eck instantly connected, he said.

“He had heartworm and he was scheduled to get euthanized. And I adopted him and took him down to have the heartworm treatment, and now he [doesn’t] have heartworm anymore and he’s happy.”

The Publix employees paid Peppy’s adoption fee out of their own pockets. Eck only found out when he went to sign Peppy’s paperwork that the adoption fee had already been covered.

These women didn’t go above and beyond like this just because they care about their jobs. They really care about people, and dogs too.

“He comes in to visit us all the time and we love him.”

Eck and his new best friend are so happy together, and the employees at Publix are happy to see them happy!

Peppy isn’t replacing Bobo, but he is filling a new place in Eck’s heart.

“It’s great. He stays right with me and he loves me. He flies around, chasing rabbits, chasing all my cats. And then we he gets there he don’t do nothing, just snuggles up. He just loves the chase.”

I wish I lived near this Publix store!

The post Publix Employees Surprise Loyal Customer With A Dog After His Pup Dies In An Accident appeared first on iHeartDogs.com.