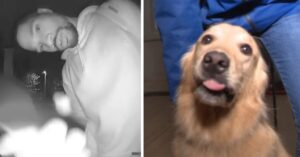 In addition to being wonderful, loving companions, dogs can make our lives better in a myriad of ways. One amazing trait many of our canine friends possess is an inherent interest in protecting us from harm.

Recently, in the Elizabeth neighborhood of Charlotte, North Carolina, homeowner Martin Jacobs suddenly awoke in the middle of the night. He and his Golden Retriever Gus had been sleeping in the kitchen while their home was being renovated.

“I heard creaking of the floor, I saw flashing lights of a flashlight. So I called out really loud, ‘Hey! Who’s in my house.’”

Hearing the alarm in his dad’s voice and potentially the sounds of the intruder as well, Gus sprang into action. He got up and barked furiously, chasing the man away. By the time Jacobs arrived at the front of the house, Gus had already scared him off.

“It definitely was a scary situation without a doubt.”

The Ring camera outside the house captured the alleged intruder inspecting it moments before he entered. Jacobs suspects the man entered through a window that had been accidentally left unlocked during the ongoing renovations. There was even a hole torn in the plastic covering the window from the inside.

Safe thanks to his dog, Jacobs still has a hopeful view about what happened:

“I think the individual had no intention of harming me… Just saw that the home was likely not occupied since we’re doing this work.”

Protect Your Home And Family

A trained dog can often help in scary situations like home break-ins. Still, as Jacobs emphasized, you can’t necessarily rely on that protection alone.

“Leaving the lights on, making it seem like someone is here, taking the extra precautions to check the windows at night. We have an alarm system but we don’t have sensors on the windows. That might be something we change in the future.”

Known for their friendly and calm disposition, you wouldn’t necessarily expect a Golden Retriever to be the ideal guard dog. Gus proves to be the exception to the rule. This breed is, however, strong, athletic, and fiercely loyal.

If you are looking for a dog more likely to guard you and your home, start with these breeds: