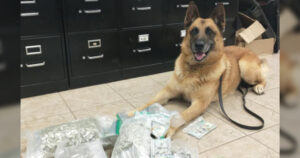 In Marshall County, Kentucky, the community is celebrating a good dog. Fox has been protecting and serving his community first with the Paducah Police Department since 2011. In January of 2018, he joined the Marshall County Sheriff’s Office, continuing his hard work, but now it’s time for Fox to put his paws up in retirement.

With the Marshall County Sheriff’s Office patrolling roughly 300 square miles and over 900 miles of roadways, Fox kept full days protecting the citizens of his county. Now, while handler and “daddy,” Deputy Lofton Rowley, heads out to keep busting bad guys, Fox will be able to enjoy his days doing some of a dog’s favorite things. It’s treats and naps for this hard worker from here on out.

Fox began his career as a police dog with the Paducah Police Department when he was 2 years old. In 2018, he transferred to the Marshall County Sherriff’s Department and partnered up with Deputy Rowley. Most police dogs have a career that spans 7-8 years, but Fox proved to be an anomaly, serving for more than a decade. At 12-years-old, with more than ten years of work under his collar, Fox is ready to chill. And he’s earned it.

In talking with The Paducah Sun, Sheriff Eddie McGuire said, “Fox has just been a really good dog. He’s not had some of the problems other K-9s have with their hips and things, so he’s able to get a few more years than the average K-9 would last.”

Fox excelled at his job, especially in the areas of “tracking, criminal apprehension, and narcotics detection.” Thanks to a good boy, the streets of Marshall County have known a deeper level of safety with Fox apprehending “countless criminals” while helping to rid the county of drugs.

But Fox wasn’t all business. He acted as a sort of “therapy dog” for many, which is unusual for many working dogs. In fact, most police dogs don’t interact much with the public, but Fox enjoyed the company of people, especially children. He even allowed pets from kids taking part in the DARE program!

Because of that heart, he and Rowley enjoyed a tenure at a local school for the last few years of Fox’s career. Fox truly proved to be “kinda the best of both worlds.”

Though he’s a diligent work dog who busts criminals on the regular and keeps schools safe, he is still a dog, and dogs get dirty. Even decorated police heroes need baths, whether they like it or not. And it looks like Fox might not be the biggest fan of bath time!

The community celebrated Fox’s hard work as a police dog with a party in his honor, but now he’ll just be chilling at home, enjoying retirement while hanging out with Deputy Rowley, his best friend and “daddy.”

On Facebook, the Department shared, “Fox has been a great asset to our community and will be greatly missed.”

Young Paws on the Beat

With Fox’s retirement, the department needed a new canine officer, and they were able to acquire two. But they aren’t cheap at typical prices of $20,000 each.

Sheriff McGuire explained, “With our budget, we would never be able to carve out the funding for two active K-9s without the help of the community.”

Along with the community coming hard with donations, the fundraising efforts of the Marshall County Community Foundation helped fill the coffers, allowing for the purchase of two police dogs for the department.

“Matter of fact we wouldn’t have been able to afford one dog, much less two, had they not pulled through and provided that funding for us.”

Conor and Batu are the newest police dogs on the block, and at a little more than a year old, they’re raring to go! Fox left some big paws to fill, but it seems Conor is already making strides to live up to his predecessor. The young rookie recently participated in his first drug bust, sniffing out two ounces of meth and proving he’s already got the nose for his new job!

So, while the pups have taken to the field, we wish a happy retirement to Fox and a warm welcome to the beat for Conor and Batu!