Pit Bull Dies On Hawaiian Flight With No Explanation From Airline 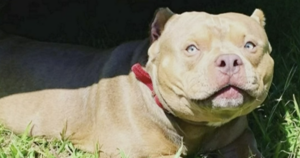 Accidents happen, but when no explanation is offered, that’s when problems arise. Hawaiian Airlines recently informed Dr. Randall Carpio that his beloved Pit Bull died on the flight home. Yet, they had no information about how and why this tragedy occurred. They didn’t provide any evidence of the canine’s death or any in-depth explanations. So, Carpio is anxious to find answers.

With the help of an attorney, Carpio is working hard to get to the bottom of this bizarre event. He misses his dog more than anything, and he just wants to know what really happened on that flight.

Louis the 2-year-old Pit Bull was going to be trained as an emotional support dog after flying from Hawaii to Seattle. Carpio is a naturopathic doctor, and he thought Louis’ kind temperament would be great for comforting his patients. But when Louis never arrived in Seattle, Carpio was heartbroken.

The airline alerted Carpio’s family via text that the dog had passed away. So, Carpio immediately called Hawaiian Airlines for more information. During their call, he said the representative asked for his permission to allow them to perform a necropsy (animal autopsy) on Louis. Carpio agreed, thinking it would help.

“They described (Louis) had died and that they wanted to send his body for a necropsy,” Carpio said. “They sent me a document through email verifying that I had mentioned that it was OK, that I OK-ed the necropsy to see what happened to my dog. After that, I didn’t hear from them until the Monday after that. So, a few days later, I called a few times, inquiring about what happened but (received) no real, definitive evidence that my dog had died.”

The airline told Carpio that the necropsy was completed, but didn’t determine Louis’ cause of death. They never sent any results or proof of the necropsy to Carpio, which made him even more skeptical. Instead, they only sent him the dog’s ashes.

Attorney Evan Oshan is working with Carpio to uncover the truth. They’re not suing the airline yet, but instead, they’re trying to find more answers before taking extreme measures. Hawaiian Airlines released a statement to news sources, but it wasn’t convincing.

“We are deeply sorry about the passing of our customer’s dog. We shared the necropsy results with the owner a week ago, and have returned the dog’s remains,” said Hawaiian Airlines.

Oshan insists that Carpio never received the necropsy results as claimed. He said that animal deaths on airlines are also more common than people realize. Oshan says that airlines often brush these situations off, and many families aren’t willing to fight back. But Carpio knows that something isn’t right.

“This is highly irregular. When a necropsy is done, it’s a very detailed procedure. Organs are removed, they’re weighed. There’s a lot of work that’s done. To just say there’s a necropsy performed, then send a box of I don’t know what? It’s highly unacceptable,” said Oshan.

Like most airlines, Hawaiian Airlines issues a warning on their website saying that bringing brachycephalic dogs on planes isn’t recommended. However, the representative never mentioned that to Carpio, and Louis was in good health when he boarded the plane. If the airline would simply offer a deeper explanation, then this situation wouldn’t be as problematic. But no dog’s death should be treated lightly, and Carpio just wants justice for his beloved Pit Bull.

The post Pit Bull Dies On Hawaiian Flight With No Explanation From Airline appeared first on iHeartDogs.com.