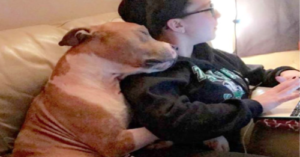 You might roll your eyes at the “a picture is worth a thousand words” saying, but that’s just because you’re not seeing the right picture. When you get a look at a rescue Pit Bull leaning on his adoptive mom, you’ll more than get it. His name is Russ, and by the look on his face in this photo he’s never been happier to be out of a shelter and in a family at last.

22-year-old Kayla Filoon is a volunteer dog walker with ACCT Philly. In The Dodo, Filoon described how she knew Russ would become her forever friend when she first met him at the shelter.

“He came in as a stray, and he was really beat up. He was missing fur on his tail and ears. He was also terribly skinny. They told me he was about 40 pounds when he came into the shelter.”

That skinny 4-year-old pup went on a long walk with Filoon. There was an instant, strong connection between them.

“He was really cuddly with me, even when we went into the yard. He seemed like such a sweet dog, and he didn’t bark at any of the other dogs.”

Russ also knew commands, indicating he had belonged to someone. Yet now, he found himself in a shelter in rough condition. Filoon was heartbroken.

The shelter had an overcrowding issue. Russ, who had “kennel cough,” was potentially at risk of being put down. Obviously there was no way the compassionate student was going to let this happen.

Filoon called her mom to let her know she simply had to adopt this dog.

“My mom thought I was kidding, because I always fall in love with the dogs that I take out – it’s hard not to. So she didn’t really believe me, but there was something about Russ.”

The next day, she returned to the shelter after class to give Russ a car ride. After that, there was no going back for her. She filled out the paperwork to make Russ hers.

Home For Good At Last!

Russ went home with Filoon where he would rest up to get over his kennel cough. She quickly learned he loves to do his resting right up against her. Just look at how unbelievably content and grateful he looks in this picture. See what I mean now?

Even if there doesn’t appear to be room for him, Russ will find a way to sit as close to his person as possible.

“I was worried that when I brought him home, his attitude might change. But he’s still the same relaxed, I’ll-lay-down-and-cuddle-with-you kind of dog. He’s probably one of the most grateful dogs I’ve ever seen.”

Filoon has six housemates, and they each love having the pup at home! Russ also gets along great with other dogs and people of all ages and sizes. He finally has a chance to show it.

There are so many loving Pitties like Russ in shelters, waiting for a chance to prove themselves. Adopt, don’t shop!