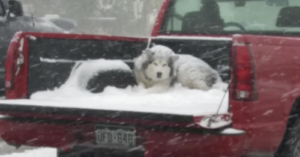 All dogs deserve to be treated with kindness and compassion. Food, shelter, love and protection are just some of the basics. They can’t always take care of themselves, so it’s our job as parents to look out for their best interest. But this isn’t always the case.

A recent photo went viral of a poor Malamute riding in the back of a pickup truck. The truck tailgate was open, and the dog was covered in snow. This photo started an outrage among some viewers, stating that this event should be considered animal cruelty – regardless of the breed.

At the time the photo was taken, the weather was around 16 degrees with a wind chill around 0 degrees. Even though the dog appears to be a Malamute, Dr. Missy Tasky, a veterinarian at Gentle Touch Animal Hospital, pointed out that no dog should be left in these conditions. This is especially true since the vehicle was moving at almost 50 miles per hour. Just because a dog can survive in those conditions doesn’t mean they should.

“That breed of dog can withstand extreme temperatures, extreme cold, a lot better than the average dog,” said Dr. Tasky.  “But in general with hypothermia, just like for people, they can get the frostbite situation, it could cause their blood pressure to drop, and their heart rate to drop.”

Unfortunately, when the state patrol was asked, they responded that it’s completely legal to keep a dog in the back of a truck. Even if the tailgate is not secured, it’s still technically legal. However, that poor dog in the back has nowhere to go. If the truck were to brake suddenly or be involved in an accident, the consequences could be dire. Legal or not, this doesn’t seem to be the safest practice.

However, the law isn’t cut and dry for this scenario. There are a lot of factors that could go into it. Wind chill, the breed of dog, and the appearance of the dog could have an effect on the situation. If there is enough evidence backing it up, then these actions could be considered animal cruelty.

“Take into consideration, things that adversely affect us are going to affect our [dogs] as well,” said Dr. Tasky.

Therefore, if a human would be cold in the back of a truck on a snowy day, so might a dog – even though certain breeds are better suited for cold environments. It’s not fair that a dog should have to go through a situation like that if a human doesn’t have to. Our dogs are our babies, so they deserve to be treated with love and respect.

If you witness a dog in what appears to be an unsafe situation, and you are worried about their safety, please take a photo and contact the authorities right away. Our four-legged loved ones can’t always stand up for themselves, so sometimes it’s up to us. 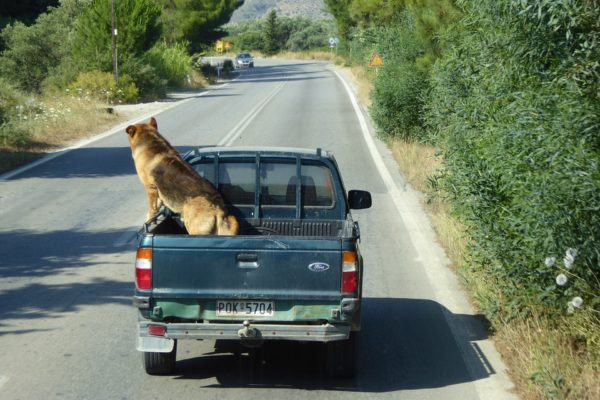