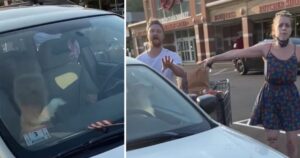 In 80 degree heat, the temperature inside a parked car can reach 110 degrees in just over 20 minutes. Without water, a dog can suffer heatstroke in that amount of time, which can ultimately be deadly.

After a dog spent close to an hour in the back of a parked car in Massachusetts, a witness decided it was time to intervene. Jennifer Williams-Frangie broke into the car so she could air it out and give the dog inside some water. It’s possible this action saved the dog from heatstroke.

The owner of the car and dog, however, did not see it that way. A fight later broke out between Williams-Frangie and the woman who didn’t consider this break-in a rescue. Another witness, Joshua Candelaria, uploaded a video of the confrontation to Facebook, describing what had happened first:

“[William-Frangie] opened a door and gave the dog water as he was gasping for air and dying of thirst. We waited a total of 42 minutes for the owner.”

An Argument Over Rights And Intentions

When the owner returned to the car with her husband and two children after 42 minutes, she reacted furiously. She screamed at both Candelaria and William-Frangie, insisting the family had only been gone 20 minutes and that all the car windows were down. Her husband explained that the dog had just been swimming and was, therefore, “all cooled down.”

Candelaria and Williams-Frangie suggested they take their dog inside with them next time. The owner then got even angrier, screaming and swearing at the witnesses, insisting her dog is only shaking because strangers touched her private property.

As the yelling devolves into slurs, Williams-Frangie insists, “I’m sorry you’re upset. I was trying to help.” When the police were mentioned, the car owners claimed law enforcement would be on their side since property was involved.

In her own defense, Williams-Frangie later wrote on Facebook:

“It’s 85° out, you’re parked on blacktop and even though you’ve cracked your window about 2 inches you’ve decided to leave your poor little dog in the car while you grocery shop. I am that person that will sit with your dog and watch to make sure he’s OK and then I’m going to break into your car after a certain amount of time and give him a bowl of water.”

You can view the footage of the argument here, but be aware it contains some offensive language.

So, who is in the right here, the person who broke into a car or the person who left a dog inside it for over 30 minutes? As it turns out, the law is on Williams-Frangie’s side. According to Massachusetts State Police:

“Under state law, members of the public can then take action to remove the animal if it is in severe distress and the owner cannot be immediately located.”

Rules about this vary from state to state, but you should become familiar with your state’s legislation. Intervening, even if it involves the destruction of property, can save a dog’s life.

The post Owner Yells At Woman Who Broke Into Her Hot Car To Save Dog appeared first on iHeartDogs.com.