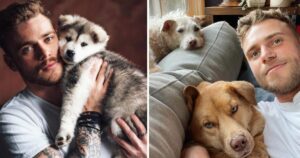 As an Olympian and a Gold Medalist, skier Gus Kenworthy has a huge platform. A lifelong animal lover, Kenworthy uses that platform to advocate for their welfare.

His rescue dogs are incredibly important to him, and they inspire him to work with animal welfare organizations both in the U.S. and abroad. When he’s not freestyle skiing in competitions, he’s a loving and dutiful dog parent.

When Kenworthy was just 11-years-old, he met his first dog Mack at the animal shelter. He told Daily Paws his time growing up with the rescue dog shaped him and his passions.

“Because of that experience, I think I’ve always felt strongly about animal adoption and knowing that had we not got Mack that day, he potentially could have been put down or lived a sad life. I feel so lucky that we got to give him an incredible life.”

During the 2014 Olympics in Sochi, Russia 11 years later, one year after Mack passed, Kenworthy made headlines with his efforts to find homes for Russian stray dogs abroad.

Around the time of the Pyeongchang Games in 2018, Kenworthy also worked with Humane Society International to advocate for thousands of dogs in Seoul. He ended up rescuing a fluff ball of a puppy named Beemo there.

Tragically, Beemo died from a heart condition before she had even grown into adulthood. Her death came as a complete surprise to her dads, who had not known of this birth defect.

They brought her to the vet when she stopped showing interest in her food one day, where they then learned her heart was enlarged and her lungs had deteriorated. Realizing the severity of the situation, they brought Beemo to an emergency vet.

“The past two days have been a blur. It all happened so fast that it’s still hard to believe it. The ER doc told us that even if we’d somehow spotted the issue earlier it wouldn’t have made a difference in the end. He said that she’d been living on ‘borrowed time’ from the get go.”

Though their time together was cut short, Kenworthy feels grateful he got to love her at all.

“I’ve never loved anything or anyone in the way that I loved that dog and she is and will always be deeply missed.”

Despite the heartbreak, Kenworthy kept up his work with HSI. In the summer of 2018, he fell for another dog from a litter rescued from Korea. The Korean Jindo and Labrador Retriever mix was also rescued from a dog meat farm.

Kenworthy named her Birdie as a tribute to Beemo, who “loved birds and the snow.” Birdie is now almost 3-years-old, and she and her dad are inseparable.

“We’ll watch TV together, she’ll hang out by my feet while I read, we’ll go for hikes and car rides. It’s actually not anything that any other dog owner doesn’t also do, but it feels connected and bonded and just a better experience having her there.”

In addition to being best friends, Kenworthy and Birdie are cover models for Autotrader’s 2022 “Calen-Dogs” calendar. Autotrader will make a donation to Adopt-a-Pet.com for each calendar claimed.

When asked why he does so much for his animals and stray dogs abroad, Kenworthy explained:

“There are so many animals in shelters that need their forever homes, so I hope that anyone hearing about my story and my experiences with Birdie would feel encouraged or implored to consider adopting a pet. It really has changed my life for the better in so many ways.”

No matter how many Olympic medals you have, there’s always time to rescue dogs!

The post Olympian Rescues Another Dog From A Korean Meat Farm After Pup’s Tragic Death appeared first on iHeartDogs.com.