Officers Line Up For Police Dog’s Last Ride Ever 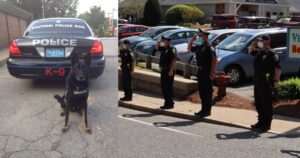 A dog police officer obviously sounds cute, but the fact is these amazing animals are valuable members of their team. Dax, a 13-year-old German Shepherd, served the Ashland Police Department in Massachusetts for 11 years. He just retired in February after serving for a longer than the average career. And what a career it was!

As he’s pretty old now, 13-year-old Dax’s condition recently started to worsen. His handler, Sgt. Chris Alberini, made the extremely difficult decision to let him go. In a tribute to their fallen comrade, the Ashland Police Department wrote on Facebook:

“Rest easy K-9 Dax. We love you and we will miss you. Thank you for your service boy. We have the watch.” “Regal – I think that’s the best word to describe him. He was so regal when he was standing there looking at you – nobody messed with him.”

It was no surprise to Chief Anfano that news of the dog’s death impacted so many people.

“Dax is a town hero – he’s always been a shining star for the town and police department.”

Dax’s Legacy With The Force

Throughout his career with the force, Dax had 16 “violent apprehensions,” meaning he bit a suspect during an arrest. Dax also recovered more than 50 missing people.

“Dax was a police officer like all of us. He was always there when the department needed him. That dog saved officers’ lives.”

He once saved his handler from an armed suspect hiding in an attic. Dax sniffed the suspect out and latched onto his ankle, giving Sgt. Alberini time to shoot the suspect. That heroic action earned him the George L. Hanna Memorial Award for Bravery. He was the first canine to receive the award!

Dax took his final ride with his handler, Sgt. Chris Alberini, on Friday. The two had a very close relationship, which made that last ride all the more difficult.

“It was very emotional. It’s like losing a child – they’re part of the family. When the final radio call was made, there wasn’t a dry eye anywhere.”

To indicate how important Dax’s service was, officers came out in droves to salute him throughout Ashland. There were so many participants, police needed to designate two separate routes. Cars honked and people cheered for the K-9 officer.

At 3pm on Friday, Dax died peacefully at the animal hospital beside Sgt. Alberini.

“There’s this saying that goes something like, ‘The definition of Heaven is a place where every dog you’ve ever owned meets you at the pearly gates. The same goes for police dogs.”

Posted by Ashland Police Department on Friday, May 15, 2020

Dax lived a wonderful and productive life and got the hero’s goodbye he deserved. Rest in peace, officer.

The post Officers Line Up For Police Dog’s Last Ride Ever appeared first on iHeartDogs.com.