Obese Beagle Loses Half His Body Weight & Is Helping Another Beagle Do The Same! 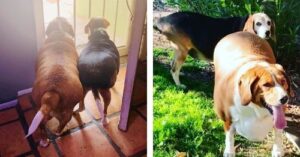 An Obese Beagle named Wolfgang was found wandering the streets when a dedicated family welcomed him into their lives. After helping the chunky pup lose almost half his body weight over the last year, they have now turned their focus onto another dog in need.

You may remember Wolfgang from a previous story we shared last year about a stray dog’s incredible journey to health. Wolfgang is a 90 pound Beagle that was found roaming the streets in Arizona, likely abandoned due to his special situation.

Wolfgang was welcomed into the Arizona Beagle Rescue after discovering he was battling a medical condition called hypothyroidism, which makes it extremely difficult to lose weight. With the extra help that he would need to shed the pounds, they knew they had to find a family that was up for the special task. Thankfully for Wolfgang, they found the perfect home.

After over a year of specialized exercise, veterinary care, and aqua rehab, Wolfgang was able to lose over 40 pounds! The McManis Family offered Wolfgang the love and patience he needed to reach his weight loss goals, and now lives an active lifestyle that fills his heart with joy.

After their success with Wolfgang’s weight loss, the Arizona Beagle Rescue immediately thought of the McManis family when another overweight Beagle named Jameson was surrender to their team. Though the McManis family was a bit nervous about bringing another dog into their home, they could not shy away from a dog in need.

Since their new friend Jameson has entered their lives just a few months ago, he has already lost 25 pounds! Though he’s making incredible progress with his new foster family on his side, it was a bit more challenging for Jameson to adjust than it was for Wolfgang.

“Jameson is only 3 years old, but he was an only dog. He loves the other dogs, but sometimes he isn’t used to sharing or being part of a pack.” – Erin McManis

Aside from adjusting to a home with multiple dogs, Jameson was also tending to a knee injury due to his weight gain over the years. Luckily, he just received the surgery he needed to repair his knee and continue down his path to weight loss.

Wolfgang has been a wonderful friend to Jameson throughout his weight loss journey and continues to encourage him each step of the way. With the McManis family on his side, there’s no doubt that he will reach his body goals!

The post Obese Beagle Loses Half His Body Weight & Is Helping Another Beagle Do The Same! appeared first on iHeartDogs.com.