Nostalgic Dog Walks 57 Miles Back To Her Old House 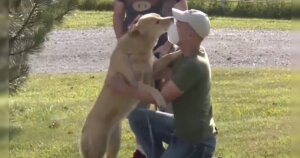 Meanwhile, across state lines in Lawson, Missouri, a couple returned home to a surprise. Cleo was lying there on their front porch, as if she lived there. And in fact, she used to. Clearly, Cleo never forgot that!

When the homeowners  Colton Michael and his wife Britney tried to approach Cleo, she wouldn’t let them get close. Colton theorized she probably didn’t understand why strangers were inside of her house.

“She finds her way home, and there’s some strangers living in it. That would be scary for anybody.”

Colton and Britney had Cleo’s microchip checked. That’s when they realized she belonged to the people who used to live in their house. The former homeowners had recently posted on Facebook about their missing dog. No one could have guessed she’d end up back at their old house in Missouri, 57 miles away!

Drew, one of Cleo’s family members, told KMBC News he doesn’t know how she got so far away. He’s just so glad to have her back.

“It’s the most bizarre story. Really, she’s everything to us and to my mother.”

In the end, how Cleo got from A to B remains a mystery. Some have theorized that Cleo made it somewhat far from her new house in Kansas, but was discovered by someone on the way who had her microchip scanned. The microchip was registered to the Missouri address. Whoever found Cleo may have dropped her off at what they believed was her house.

That said, I’ve seen some amazing things from dogs, so I’m willing to believe Cleo walked the whole way!

Even though she missed her old house, Cleo seemed to miss her family more. She ecstatically greeted them when they arrived to pick her up.

Colton assured Drew that he’ll be looking out for any Cleo sightings going forward.

“Now that we know who she belongs to, if she pops up again we’ll know who to call.”

Hopefully Cleo learns to accept her new home soon. Maybe she will once she realizes her people don’t come with the old house.

The post Nostalgic Dog Walks 57 Miles Back To Her Old House appeared first on iHeartDogs.com.