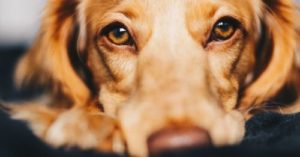 Training a new puppy can be frustrating. With the possibility of accidents in the house and destruction of your belongings, overwhelmed pet parents often resort to yelling. What was once thought of as harmless mild punishment style training is now proving to have lasting effects on our beloved companions. It’s time to think twice before yelling.

With the variety of training schools and resources that are available to us, it’s important to understand the most common forms of training styles that are offered at dog training academies. When you are researching methods, you will often find these two common styles of training:

Most studies on dog behavior and punishment training have been performed on police and military dogs, so it was time to see how our furry companions felt about our training styles. To find out how true companion dogs reacted to punishment, the scientists at the University of Porto in Portugal (led by Ana Catarina Vieira de Castro) recruited 42 dogs from reward-based training programs which used food or play as rewards, and 50 dogs from negative reinforcement style training that included yelling and leash jerking.

In order to accurately measure their stress levels, each dog had their saliva tested for the stress hormone cortisol before and after training, as well as had their training sessions recorded.

The short term results of more “fear based” training left the dogs with higher levels of cortisol in their saliva during training, as well as at home in the following hours after their training sessions. They also displayed physical examples of stress such as licking their lips and yawning. Dogs with positive reinforcement training did not experience any spikes in their cortisol levels or stress related body language.

To find out if their training styles had lasting effects, the team studied 79 of the dogs’ reaction to a food reward. First, they trained each dog to associate one side of a room with a tasty sausage treat. If the bowl was present on that side of the room, it would contain a sausage. Each bowl on the other side of the room would always be empty.

They then placed an empty bowl in different positions between the two extremes and measured how quickly each dog would approach the new bowl.

The pessimistic dogs also happened to be associated with separation anxiety and multiple behavioral problems. The more severe the punishment-based training they received, the more drastic the results.

This study proves that our style of dog training can have lasting impacts on our furry friends. Though the effectiveness of training style were not addressed, nor which option is “better”, it’s clear that the lasting impact on a dog is quite sad.

“Critically, our study points to the fact that the welfare of companion dogs trained with aversive-based methods appears to be at risk.” – Researchers

Some studies have even shown that reward style training may help our dogs better understand their training process versus just being fearful of an action. No matter which method you choose to abide by, it’s now clear that reward training is much better for your dog’s happiness and mental health.

Reward style training is also thought to be more effective in the sense of instilling obedience in every situation. In fear-based training, dogs often associate one pet parent or person with fear of possible punishment. By using this training method, your dog may not follow commands in situations that don’t involve you.

By using reward style training, every person with a command brings the possibility of a reward!

As pet parents, it’s up to us to provide a life filled with love and comfort for our furry friends. By focusing on reward style training, we can help our dogs understand the basics of obedience training without the fear and stress that can come along with punishment style methods.

Though our dogs can come with their own set of frustrating quirks, they can be addressed in a kind and fear-free way. The next time you have the urge to yell at your furry BFF, remember that their happiness and comfort lays in your hands.

The post New Studies Show That Yelling At Your Dog Can Have Heartbreaking Effects appeared first on iHeartDogs.com.