House Passes Bill To Give PTSD Service Dogs To Veterans 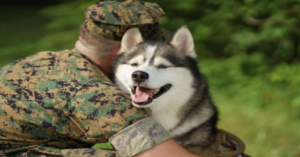 For years, the community has worked hard to raise money to help veterans get service dogs. The cost of a service dog is expensive, so many people in need cannot afford to have one by their side. Currently, Veterans Affairs supports veterans that need a service dog for mobility issues, but they don’t cover costs for those with mental health problems. However, a new bill could change this completely.

This new bill is called the Puppies Assisting Wounded Servicemembers Act of 2019, or the PAWS Act for short. This act is currently being looked at more closely, and there are many people supporting it. In fact, the bill was recently passed unanimously in the House. Now, it just needs to go through the Senate.

Rep. John Rutherford from Florida and Sen. Deb Fischer from Nebraska created this bill. Their goal is to make service dogs accessible to more veterans, especially for those with mental health problems such as PTSD.

A service dog could greatly help some of these veterans, but the price is just too much. Service dogs trained to help with PTSD start at around $5,000, but many are even more expensive.

“Veterans with PTSD may have left the battlefield, but they are still in a tough fight,” Fischer said. “Service dogs can provide support, peace, and joy to these Americans as they confront the invisible scars of war.”

Of course, dogs cannot fully cure mental illness, but they can make a huge difference in a person’s life. They have proven to have a positive effect on the veterans they help. So, the more veterans that can have a service dog by their side, the better.

Luckily, there are many advocates for the PAWS Act. They will all continue to push for it to make sure it gets passed as soon as possible.

“People are always asking me what is it the dogs actually do,” said Rory Diamond, the CEO of K9s for Warriors. “The genius of the dog, or the magic, is it gets the warrior out the front door. You have a reason to get up in the morning because the dog needs to be fed and walked.”

Veterans Affairs has previously done studies about service dogs for people with PTSD, but complications had always gotten in the way of completing the study. After this bill was passed in the House, they decided to restart the study, and the results will be released over the summer. It’s great that service dogs for PTSD are finally getting the attention they deserve, especially when they’ll be helping veterans in need.

This amazing bill made it through the House with no problems at all, so let’s hope that the same will be true for the Senate. At this rate, veterans will finally get access to the service dogs they need in no time!

The post House Passes Bill To Give PTSD Service Dogs To Veterans appeared first on iHeartDogs.com.