Neglected Great Dane Has Amazing Transformation Thanks To UPS Driver 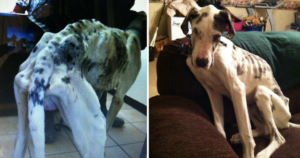 UPS driver Gavin Crowsley was on his delivery route, doing his job as usual. Everything seemed like it would be normal until he saw a horrifying sight. He came across an extremely skinny dog on a short chain. No food or water was provided, and it looked like the weak pup was on the verge of death.

Crowsley knew he couldn’t leave the dog alone any longer. He feared that the dog would starve to death without proper care. So, the kind UPS driver took the time to rescue the neglected dog and bring him to safety.

Thanks to Crowsley’s kind actions, the dog’s life was saved. The dog was rushed to the Clay County Humane Society, where he was named Phoenix. Crowsley thought the dog was a Dalmatian at first, but he turned out to be an extremely malnourished Great Dane. Great Danes typically weigh well over 100 pounds, but poor Phoenix weighed less than 70 pounds at the time.

“I could see every bone in his body,” said Crowsley. “He was just lying there. I knew if that dog didn’t die from starvation, he was going to die from the weather. I didn’t want to have a confrontation, but I couldn’t just leave him there.”

Thankfully, Crowsley did the right thing. Phoenix’s recovery was long and difficult, but he survived. When he arrived at the shelter, he suffered from malnourishment, pneumonia, and frostbite. All his conditions would have worsened if Crowsley hadn’t rescued him.

Soon, Phoenix weighed 160 pounds, looking like a perfectly healthy Great Dane. He was blind in one eye and completely deaf, but that didn’t hold him back. He soon found his forever family in no time.

About 7 months later, Phoenix’s mom brought him to see Crowsley again. Phoenix’s transformation was incredible, and Crowsley could not believe his eyes. The big dog was unrecognizable compared to when he was rescued. It was clear that he was spoiled and loved at his new home.

Since his adoption, Phoenix was trained to be a therapy dog. He loved going to nursing homes to cheer up the residents. He even became famous on social media, raising money to help other dogs in need. The sweet dog quickly became an inspiration to all.

Phoenix lived with his family for many years, but sadly, he recently passed away. They never knew his exact age, but he was guessed to be over 10 years old when he passed. So, he was actually fairly old for such a large dog.

His mom made a beautiful tribute to him on his Facebook page, and she continues to save dogs in his honor. He will be missed greatly, but at least Crowsley’s kind actions helped him live his life to the fullest.

The post Neglected Great Dane Has Amazing Transformation Thanks To UPS Driver appeared first on iHeartDogs.com.