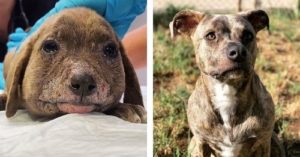 Nova was surrendered to a local animal shelter after she had been bitten by another dog. Her wounds were infected, and she was given 3 hours before she would be euthanized due to her injury. Thankfully, Love Leo Rescue came to Nova’s aid.

A foster from Love Leo Rescue picked up Nova from the shelter and rushed her to their regular veterinarian. She had never seen a puppy with a face so swollen and had no idea how much care should would require.

Nova was immediately hooked up to IV fluids for hydration as well as aggressive antibiotics. After some much needed wound care and time in the animal hospital, the infection in her face had improved significantly. She was ready to go to her new foster home!

As soon as Nova set foot in her foster home, she began to show off her adorable personality. She was playful, confident, and even got along with her older foster siblings. It seemed like this sweet girl had finally found the light at the end of the tunnel.

A few days after Nova settled in, she took a turn for the worst. She became extremely lethargic, and it was clear that something was seriously wrong. Once she was taken back to the rescue’s veterinarian, they discovered she had a deadly virus called Parvovirus.

Parvo is an aggressive virus that affects puppies and young dogs and attacks the gastrointestinal system to the point of extreme illness. These puppies often experience severe vomiting and diarrhea which causes them to become dangerously dehydrated.

Yet again Nova was back in the hospital, but this time was even more critical than her first battle.

Over the next few days, Nova’s health fluctuated. She had some extreme lows that terrified her new foster, but somehow, she pulled through again. Super Nova is a fighter like no other!

Once it was clear that Nova was truly healthy for the long term, it was time to find her a forever home. Christina and Chelsea had been watching Super Nova’s journey closely, and jumped at the chance to welcome her into their loving family.

Nova is now living her very best life with her furry best friend, Harper. The two pups are absolutely inseparable, and enjoy their daily adventures and cuddles!

We are so happy that Nova got the happy ending that she deserved! Thank you to the dedicated animal rescuers who refused to give up on her. You are all rock stars!