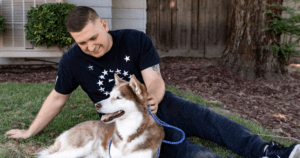 Manuel Vejar is a Navy recruiter who has always had a love for Siberian Huskies. When he was younger, he couldn’t wait to have a Husky of his own, so he purchased a Husky puppy named Champ in 2011. At the time, he served on the USS George H.W. Bush, so his family cared for Champ while he was gone.

When Vejar returned, he spent 6 amazing months with Champ, but then the Husky took off. Champ had always loved running, but Vejar feared that this time the pup had run away for good. However, he refused to give up hope.

Husky on the Loose

Vejar and his family searched everywhere for Champ. They checked all of his favorite spots around town, which included the high school and cemetery. Vejar even reported Champ missing in his microchip registry. At first, many people came to him reporting Husky sightings nearby. But as time went on, the messages appeared less and less.

In the back of his mind, Vejar feared the worst. But another part of him never gave up hope. In 2017, he received an email asking him for Champ’s microchip status. So, Vejar confirmed that the pup was still lost in hopes that he was still out there somewhere. But life continued to go on without his furry friend.

Then, years later, an Animal Control Officer appeared at Vejar’s door. He asked if Vejar knew Champ, and right away, Vejar’s face lit up. Champ was alive! The 7 years of hoping had finally paid off.

Never Give up Hope

Champ was found at a farm about 13 miles away. A farmer had seen Champ on his property for about a month, and he had slowly gained the scared pup’s trust. The farmer fed Champ and gave him basic care, so the Husky quickly warmed up to him. But one day, the farmer noticed that Champ was limping, so he brought him to the vet.

At the vet, they scanned the stray dog for a microchip, which led him back to Vejar. They also discovered that Champ needed surgery for his displaced elbow, which would cost about $3,500.

When Champ saw Vejar for the first time in 7 years, his tail immediately wagged and he licked his dad from head to toe. After the adventure of a lifetime, Champ was finally back in a comfortable home. Vejar started a GoFundMe to help cover all of Champ’s medical costs. Before he knew it, many kind dog lovers donated enough money to pay for Champ’s surgery.

“I hope there are people out there that can see this and still maintain hope their pets one day will come home,” said Vejar.

For now, Champ is taking it easy as he recovers from his surgery. But now he knows he’s safe and loved with his family. In fact, Vejar and his girlfriend are currently expecting a baby, so Champ will soon have another family member to love too. This story is a crucial reminder that hope is so important, especially when it comes to the ones we love.