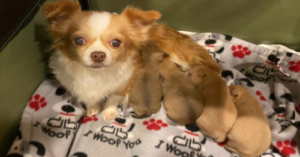 Rosa, a Chihuahua who just lost a litter of premature puppies, arrived at Secondhand Hounds in Minnesota from a commercial breeder. Then, amazingly, not a few hours later the rescue received a call about 5 2-week-old puppies whose mother had just died of seizures.

In theory, the lonely mama and the helpless babies seemed like perfectly fitting puzzle pieces. But no one was sure whether Rosa would really want to care for them.

“Introducing puppies to an adoptive mom is always a toss up. Some mommas smell other puppies and immediately decide not to accept them. Not this momma. You would have thought we gave her the 5 best presents ever. She started cleaning them. Letting them nurse. She dutifully snuggles them and counts them and loves them. They are her puppies now.”

The “introduction” only needed to last a few moments according to Secondhand Hounds Founder and Executive Director Rachel Mairose.

“It was like an instant connection…She heard the sounds of the puppies crying and her little tail started wagging faster.”

This strong gal was destined to be a mama, no matter what. She got to do just that one last time with this litter in need. As soon as the little ones are done nursing, Rosa will be spayed according to Secondhand Hounds.

“Mom will be spayed as soon as the puppies are weaned. This will be her last litter. Many moms that lose their puppies at birth go into a depression, these puppies desperately needed a mom and you could see mom light up when introduced. It was the best case scenario for this whole crew.”

For now, all the dogs are in the capable hands of a foster parent. They’ll be taken care of until the little pups are old enough to adopt.

Mairose told Kare11 she’s certain this match made in heaven was destined to be in the face of overwhelming odds.

You can visit Secondhand Hounds’ website to check on all the dogs’ availability or just to donate to their cause. I’ll just be over here, sobbing about this story!