Moose The Beekeeping Dog Has His Own Custom Bee Suit 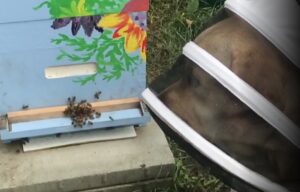 Even though it’s one of their best traits, sometimes our dogs wanting to be wherever we are and do whatever we’re doing can prove challenging. Most times, it’s harmless, like the pup sitting directly on your laptop while you’re trying to work. For one dog in Edmonton named Moose, the risks of loyalty are a little higher.

The 1-year-old Yellow Lab’s parents have an urban bee colony in their backyard that lets them produce honey. A person who knows what they’re doing can inspect beehives safely. However, a curious dog like Moose, who loves the taste of honey, could get stung by staying too close to his mom as she works.

Tracey Brindley, Moose’s mom, wanted to feed her dog’s curiosity, but safely. She wondered how Moose would tolerate the traditional beekeeping garb that protects from stings.

Brindley told CTV how she ultimately solved the problem:

“I’d put him inside and he would be barking and his nose would be shoved against the glass. I was just a little nervous about bringing him out here because he was so curious all the time, and then I thought, ‘You know what? Maybe I could get him a bee suit.”

Searching online, Brindley wasn’t able to find specific bee suits for dogs. So, she decided to modify a beekeeping veil she already owned. That’s been working out great for Moose—plus, it’s super cute on him!

“Now when I do inspections he can come out with me. He can come right up to the hive.”

Despite his curious nature, Brindley says Moose has never been stung. He tends to be right beside her while she does hive inspections and is evidently perfectly safe in his fitted suit.

“A few times I’ve looked behind me and he’s right there and it’s really hard to leave an open hive inspection and put your dog inside.”

A Companion And An Employee

Moose doesn’t just watch over his parents while they’re tending to bees. He’s also got a gig helping deliver honey to friends and family. In fact, Brindley even plans to modify Moose’s beekeeping suit to accommodate the task.

“I’m hoping to design a harness that can hold the honey jars.”

More than an unpaid intern, Moose receives his payment for deliveries in the form of some tastes of honey.

“When I have a honey jar I can’t scrape any more honey out of, I give it to him and he gets as far in there as he possibly can. He’s a Lab, they love food, but especially honey.”

A creative solution for a friendly dog has certainly turned into one of the most adorable stories of the year.

The post Moose The Beekeeping Dog Has His Own Custom Bee Suit appeared first on iHeartDogs.com.