MMA Fighter Battles For Rescue Dogs Outside The Ring 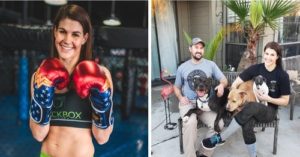 When professional MMA fighter, Audrey Wolfe steps into the Fury Fighting Championship ring on Friday, December 20, she’ll wear the iHeartDogs logo, and we’re proud to be in her corner. For Audrey, the sentiment represents more than just a sponsorship.

Audrey grew up in a dog-loving family and began her mixed martial arts training at the age of seven under UFC Champion, Guy Mezger. By 16, she was competing in boxing and kickboxing matches. Later, she added jiu-jitsu into her training to become a true mixed martial artist.

She and her husband Joe currently have three permanent dogs, but they also foster for Dallas-area rescues and use Audrey’s social media presence to showcase adoptable pups.

Beau, the “90 pound lapdog” was the first pooch the couple adopted together. Soon after, they began fostering, managing to avoid the dreaded “foster fail” until a pup named Star came along. The buff-colored Bully mix captured Joe’s heart and became the couple’s second permanent dog.

Their third rescue entered their lives by chance when they fostered a little black Chihuahua mix facing euthanasia. Little did they know, the new pooch came with six stowaways — she was pregnant!

One of her pups, Dos, required special care after a bad reaction to anesthesia. During his recovery, Audrey grew attached and Dos became the Wolfes’ second foster fail and their third rescue dog.

That’s right, Audrey has managed to foster 13 dogs despite her packed schedule! In addition, she participates in Dallas Animal Service’s Doggy Daycation Program.  This allows her to “check out” a dog for the day and give them a much-needed break from shelter life.

“I have been checking dogs out, bringing them to my gym and to dog friendly restaurants, filming videos of them, posting them on social media to try to get them some exposure, and trying to let the dogs have some fun before they have to go back to the shelter,” Audrey tells iHeartDogs. “It is a fun way to help some dogs when I don’t have as much time available.”

For those who fear fostering will be too difficult, Audrey says:

“When people ask me how I do it, I tell them it is easy. The alternative is these dogs are euthanized. I would rather deal with a little heartache on my own than see these dogs be put down. Plus, it is fun to see them go on to a forever home. [Saying goodbye] is tough, but it is also exciting and heartwarming to give them another chance.”

Are you in the Duncanville, Texas area? Root for Audrey live as she battles to become the first Fury Fighting Womens Featherweight Champion! She will take on Courtney King at 7 PM on Friday, December 20 at the Duncanville Fieldhouse.

The post MMA Fighter Battles For Rescue Dogs Outside The Ring appeared first on iHeartDogs.com.