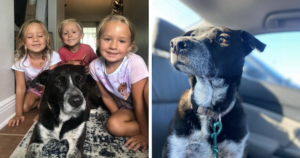 Becca Brown and her family made some tough decisions in the past few years. Her husband is in the U.S. Air Force, and they have 6-year-old triplets. Back in 2018, their lives were uprooted when they had to travel to Germany after Brown’s husband was deployed. During that time, they made the tough decision to re-home their dog Piper. They hoped the dog’s new living arrangements would be temporary, but they knew that wasn’t likely.

Somehow, after years apart, Piper found her way back to her humans. She seemed very confused but excited to receive so much love from her family.

When finding Piper a home, Brown found a family friend in Kansas who seemed like a good fit. Of course, the Browns hoped that when they returned from Germany several years later, Piper would come home to them. Yet, they didn’t think that was fair to her new family.

“It didn’t necessarily have to be temporary,” Brown said. “We didn’t want someone to get attached to her and then have us take her away three years later.”

So, when Brown realized that Piper and her new human were happy with each other, she eventually lost contact with the family. She wasn’t worried though, because she knew the dog was in good hands. So, when the Browns returned to the United States, they accepted the fact that Piper wouldn’t be coming home.

But after settling in a new house in Pensacola, the Browns experienced an unexpected twist. Piper was no longer staying with her new family, and she had the opportunity to come home! Brown’s entire family was shocked.

Carla Olmstead’s son found Piper on the side of the road in Oklahoma. When he opened his car door, she jumped in and refused to leave. So, the family took her to the vet and scanned her for a microchip. When Brown’s contact information came up, they called her right away. She didn’t respond at first but was overjoyed when she answered the family’s second call.

No one knows how Piper ended up in Oklahoma, but it almost seems like fate. Brown was prepared to pay a company to transport Piper to Florida. Yet, Olmstead was adamant that she wanted to do it herself. She wanted to witness the reunion in this unique story.

Of course, the Olmsteads were heartbroken to say goodbye to such a sweet dog, but they were happy to help in any way possible. Olmstead and Piper had an exciting road trip to Pensacola, where the pup was spoiled with burgers along the way. While the reunion was adorable, it wasn’t what you’d expect.

“Piper was a bit confused, she had never seen the new house, obviously, and she didn’t really remember the kids, who were only three the last time she saw them,” Brown said. “So it wasn’t like, ‘Homeward Bound’ or anything.”

But since then, Brown shared an update with Olmstead to let her know that Piper is readjusting well. She slept peacefully through the night and had a blast playing with the kids. It was a long journey to get there, but Piper is finally back where she belongs!