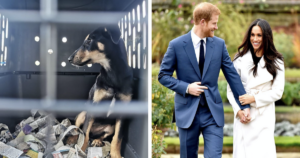 Meghan Markle, the Duchess of Sussex, is often seen wearing beautiful outfits. So many people look up to her, wanting to dress just like her. Therefore, Markle and jewelry designer Sophie Lis decided to use that information to make a difference for dogs in need.

During Markle’s trip to London, she was seen wearing a beautiful pendant designed by Lis. Since then, it has been put up for sale, and it quickly sold out not long after. The best part was that a portion of the proceeds went to a dog rescue charity, and the total donations ended up being $12,000!

The necklace is a flat, circular pendant with diamonds and rubies. After Markle wore it, Lis began selling these necklaces for £280 ($300) each. She announced that 10% of the proceeds would be donated to Wild Heart Foundation, a charity that funds and supports dog rescues all over the world.

On the pendant, there is an excerpt from the poem “The Eternal Song” by Rosemonde Gerard. It reads: “For, you see, each day I love you more. Today more than yesterday and less than tomorrow”. While those words might be significant for a person, we all know that’s how we feel about our rescue dogs too.

Fans were already in love with the necklace, but the fact that it supported a good cause was even better. So, sales began coming in like crazy. The total amount donated so far is about £10,000 ($12,000). Now, the necklace is currently sold out, but can still be pre-ordered.

In fact, rescue dogs actually hold a special place in Markle’s heart. The duchess currently has two rescue dogs named Guy and Bogart. They don’t come into the spotlight often, but she loves them both very much.

Ellen Degeneres actually inspired Markle to adopt Bogart. The two ran into each other at a shelter in Los Angeles. Degeneres saw the way Markle was looking at Bogart, and she told her that she had to adopt him. Even though Markle was still deciding, Degeneres’ words stuck with her, so she knew she had to rescue the dog.

Markle has been a huge dog lover her whole life, so she’s happy she could help with these incredible donations. She knows from experience that rescuing a dog is an amazing experience.

“When the Duchess of Sussex was spotted wearing the pendant, it struck a chord with fans the world over,” said Wild at Heart Foundation. “Not only are we delighted to see Sophie’s stunning creation get the publicity it deserves, this royal seal of approval led to a rush of sales.”

Wild at Heart Foundation, Lis, and Markle are all extremely grateful for everyone that purchased the necklace. Not only will they have a beautiful piece of jewelry, but they also helped dogs in need, and that’s the most important part of all.