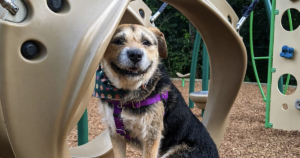 People Magazine announced the top ten rescued cuties of 2021 at the beginning of September, and they recently narrowed it down to the top three finalists. All the finalists are adorable and worthy of the top spot, but only one can be crowned the winner. So, let’s take a look at all the dogs that made it into the finals. Their cute faces are sure to make you say, “aw!”

Ten rescue dogs made it into the finals, and their photos were featured online and in the magazine. Voting is now closed, but the community votes helped select the top three.

Aslan was abandoned by his first family, but now he’s living his best life in a new home. He’s a 1-year-old Chow Chow who loves his human baby brother. His parents sometimes catch him showing affection to the baby by licking his feet.

Sweet little Piper was only four months old when she broke both her back legs. But now, she’s a year old and running around with ease. Her humans love her adorable underbite.

Fern came from a hoarding situation in bad shape, but after her adoption, she came out of her shell and learned what love is like. She regularly gives her humans kisses as a way to say ‘thank you!’

Panda’s name is very fitting, considering that her coloring looks just like a panda bear! She has helped her humans foster dogs, and she also has a new rescue dog sibling, who has the same unique fur pattern as her.

1-year-old Lucy found her forever family amid the COVID-19 pandemic after being rescued from the side of the road. She helped her humans learn to cope with anxiety, and they give her plenty of love in return.

Heaven is beloved for the adorable smile that she takes with her wherever she goes. This 3-year-old pup started out as a foster dog, but her foster family knew she was meant to stay in their family forever.

3-year-old Bogey is blind in one eye and completely deaf, but he doesn’t let that hold him back. He’s great at learning new tricks by watching his human’s hand signals.

Poor Charlie was found alone in the woods in Tennessee, but a kind family from Massachusetts gave him a home. Now, the 4-year-old pup has a yard of his own to run around and play in.

Keeper is 17 years old, but he hasn’t shown any signs of slowing down! He has gone through so many major life events with his family, but he remains happy and loving through it all.

This 7-year-old Pit Bull’s mom fell in love with her while volunteering at a dog rescue. Now, she’s a popular dog in the neighborhood, and she’s especially loving around kids.

Who is in the Top Three?

Voting is currently closed, and Aslan, Panda, and Heaven made it into the top three! Celebrity judge Megan Hilty, along with judges from People and Pedigree, will decide the winner.

The winner will receive the following:

Any of these dogs deserve to win. Yet, they’re already winners because loving families adopted them. Who do you think will take the top spot? The results will be announced on October 13th, 2021.