Meet Basil, A Two-Legged Foster Fail From The Wuhan Streets 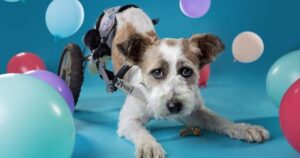 Caring for a special needs dog can no doubt be challenging. Still, the rewards of teaching a differently-abled dog that he matters and showing him the full life he deserves are absolutely worth all the efforts.

One little two-legged dog from China proved that to his foster turned adopter. A group from Furry Angels Haven Wuhan found Basil on the street in early 2020. He had sustained so much damage to his back legs, veterinarians had to amputate everything below his pelvis.

It took a long train ride to an airport and a flight after that, but eventually, Basil made it to Dog Tales Rescue and Sanctuary in Toronto. Here in Canada, far from where he was found, Basil would meet his forever person.

In April of 2020, early on in the pandemic, Dog Tales needed fosters, and Sarah Koslicki volunteered. She was already interested in adopting a special needs pup and figured fostering one would be good practice.

Koslicki prepared herself emotionally for what she might be taking on.

“I can’t even imagine all the things that he saw and all the things he’s been through, and it breaks my heart, to be honest, when I sit and think about it.”

Picking him up, though, Koslicki told Daily Paws that she realized right away Basil would be more than a foster dog to her.

“I knew it was gonna happen, too. The minute he got into my car, I was like, ‘Oh, this is it. He’s not coming back to the shelter.’”

Basil Is Worth It

The first few weeks of caring for Basil proved challenging. Because he can’t control when he goes to the bathroom, he wears a diaper that Koslicki has to change every couple of hours. She also has to apply antiseptic, diaper cream, and powder each time.

Beyond that, Basil gets antibiotics twice per day, daily baths, and monthly visits to the veterinarian. Because of his condition, he is prone to UTIs and needs to be monitored regularly for them.

Regardless, giving Basil the chance to come out of his shell and become a happy, fulfilled dog makes all the work worthwhile. Koslicki summarized:

“It’s the most rewarding experience I’ve ever done. I wouldn’t change a second of it.”

In addition to the wheelchair Basil uses to get around, he also has a Walkin’ Drag Bag, which allows him to run around without hurting his sensitive areas. Despite his handicap, this little guy loves to run!

Though no one knows for sure what Basil endured on the streets in China, we do know one thing after his life with Koslicki:

Follow @wheelpuppy on Instagram for updates on Basil’s growth and condition. You can also donate pee pads, which due to Basil’s incontinence, he could really use more of.

The post Meet Basil, A Two-Legged Foster Fail From The Wuhan Streets appeared first on iHeartDogs.com.