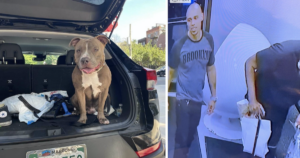 After a terrible week away from his Pit Bull named Zink, Cedric Gibson has been reunited with the lovable pup. Gibson posted the exciting news on his Instagram story, along with videos of Zink happily jumping on him and later exploring the city. No amount of time apart could change the bond that these two share.

“Thanks to everyone, they found my boy Zink,” Gibson wrote on his Instagram story.

Gibson didn’t say what led to the dog’s return. However, he took down the image of the suspects on his Instagram page, so they possibly returned the dog. No matter the reason, Zink is family, so Gibson is just happy to have him back.

Cedric Gibson and his Pit Bull named Zink are the best of friends. The 6-year-old dog is very easygoing and often travels with his human for work. But when the duo checked into the Cabana Hotel near Yankee Stadium, things suddenly went downhill.

Gibson planned to have Zink stay at the hotel when he worked at a restaurant nearby. Yet, when he returned to the hotel, his dog had been stolen. As it turns out, there had been a mix-up with the room, and a different guest walked out with the Pit Bull by their side. Now, Gibson is desperate to see his best friend again.

Gibson adopted Zink as a puppy after seeing him on a dog rescue’s website. The gentle Pit Bull recently celebrated his 6th birthday with Gibson.

“Bottle-feeding him as a puppy, just living with him, just going through everything with him … We go fishing together. He goes to work with me,” Gibson said. “Everywhere we go, they know me from the dog, like, ‘Where’s your dog at?’” said Gibson.

But shortly after Gibson left the hotel for work, a mix-up with the rooms occurred. Gibson never brought his registration card to the front desk, which is how they keep track of the rooms in use. So, the staff believed the room was vacant.

The front desk gave a new key to guests late that night. On the security footage, two grown men open Gibson’s room, and the pup comes trotting out.

Zink is a lovable pup who is a little too trusting of everyone he meets. So, the video footage later shows Zink leaving the room with the men. Then, he’s seen sitting by one of the doors that lead outside. He exits the building with one of the men.

“My dog was just following him because my dog’s a nice dog … I just want him back, that’s all I need. Like, you don’t take a family member. I had him for six years. His birthday just passed, August 18th. It’s like, yo, what in the world is going on,” Gibson said.

The hotel’s manager apologized to Gibson but hasn’t spoken publicly about the incident yet. Gibson has information about the person that was with the man who stole his dog, but that individual claims he doesn’t know the thief, despite checking into the hotel with him.

Gibson will do anything he can to bring Zink home to him. He has offered a $1,000 reward and has even offered his motorcycle too. He’s heartbroken, and he just wants to make sure that his furry friend is safe. Police are currently investigating the situation.