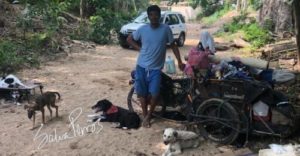 Sometimes you see something unusual on the road but don’t think much of it. Fortunately, blogger and photographer The Yogi Photographer was so struck by something he saw near Oaxaca, Mexico, he had to know more. On Facebook, he shared a short documentary about a 49-year-old man he encountered pushing a large cart along the side of the road. The cart was both surrounded by and full of dogs.

Naturally, this curious sight stirred up a few questions, so the man told videographers the reason for his doggie trolley. His name is Edgardo Zuniga Juarez, but his nickname is Edgardo “Perros” (dogs.) For the past few years, he’s been constantly traveling the perimeter of Mexico rescuing homeless and injured dogs along the way. The cart is the method of transportation.

(Note that all quotes have been translated into English from Spanish. The original Spanish can be heard in the video, embedded below.)

“I have had many dogs over the last six years. More than four hundred, closer to five hundred, all rescued and successfully homed with the help of many people. I could not do this alone.”

He credits people working for animal rights and pro-animal legislation with inspiring him to take this path.

“I had a dream and I set about making it happen. I said to myself, ‘I want to travel and help dogs.’”

Edgardo started out in a little town called Bucerias. From there he circled the entire Mexican border. The eventual plan is to reach the place where the journey started. So far, it’s been 6 years on the road.

On the cart, there’s only room for some essential supplies and some dogs and not much else. Even though he’s traveled so far for so long, Edgardo’s carbon footprint is remarkably small.

“Life for me is to never mistreat an animal or another person. Not even a plant. Life is about the environment.”

Edgardo’s own three rescued dogs, Blanco, Negro, and Chilletas, have been traveling with him all the while.

“These are the three ones who teach the others to be calmer.”

Some other pups have been on the journey for a few years still waiting to be adopted. In Edgardo’s own words, he “coexists” with the dogs, sometimes feeding and bathing them. He will also do basic care, but he leaves medical treatment to the professionals.

“We have the strength to keep going because there are always people that help us. The same vets that give discounts.”

If you weren’t already tearing up, get this: Edgardo says he often finds dogs that are too beyond help, so he will comfort them and keep them company in their final moments.

Edgardo sees many dogs in terrible shape. Some are hit by cars, some abandoned, and some abused. But he doesn’t hate animal abusers. He feels sorry for the people he believes have had no love in their lives.

When he reaches the place where he began once again, Edgardo knows his mission to help animals won’t end there. Perhaps just the method. He hopes to tackle a bigger city like Mexico City where abuse and dog homelessness runs rampant.

You can watch the incredible video below in its entirety:

Edgardo Perros – Saviour of the Dogs

A few months ago I was driving out of the small Mexican town of Mazunte, Oaxaca, when I saw a peculiar sight on the side of the road. A man was pushing a trolley along the road and surrounding him were dogs. Dogs were on top of his trolley. Dogs were behind him, in front of him and by his side. Tails were wagging furiously, barks were sounding and he just kept pushing his trolley through the heat. This is the story of Edgardo Perros. Thank you to Fernando Cortez Marques from https://www.facebook.com/videosforacause/ for all his help in shooting this project with me and editing all the Spanish interviews!Thank you to Laurie Alexander for helping with the logistics and thank you to Sat Chit Ananda for his translation work. If you would like to contribute to Edgardo and his journey, follow this link:https://www.paypal.me/SalvaPerrosAlso, take a look at his Facebook page Edgardo SalvaPerros!

Posted by The Yogi Photographer on Tuesday, October 22, 2019

And if you are able, contribute money to Edgardo’s selfless efforts here!

The post Man Spends His Life Carting Homeless Dogs Around The Country To New Families appeared first on iHeartDogs.com.