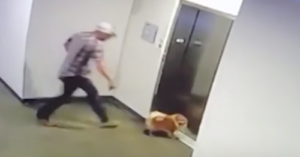 In a recent video, Johnny Mathis came out of the elevator at his apartment home in Texas. He had parked in the underground garage, so he used the elevator to make his way back up to the ground floor, which is where his apartment was.

He never expected to be a hero that day, but when he saw a dog in danger, he knew he had to think fast. That’s what caused him to save the life of a sweet little Pomeranian in the end.

In the security footage from the apartment complex, Mathis is seen exiting the elevator just before a woman and her Pomeranian approach. The little dog seems curious, and he takes his time getting onto the elevator.

However, the dog’s mom quickly hops onto the elevator without looking back. Before she realizes that her baby is not behind her, the elevator doors start closing with the little dog still outside.

As soon as Mathis sees the doors close on the dog’s leash, he rushes to the rescue. Right away, he could hear the woman screaming on the other side. She had clearly noticed her mistake immediately. At that point, she was probably imagining the worst.

You Won’t Believe How This Hotel Manager Saves a Dog From an Elevator!

But the worst never happened because Mathis was there to save the day. He fumbled with the dog’s leash for a few moments. He tried everything he could to get it off as quickly as possible. Mathis could see the little dog slowly starting to lift off the ground, but luckily, he freed the dog from the leash just in time.

Afterwards, Mathis picked up the little dog and waited for the woman to return. When the woman made her way back to the ground floor, she was overjoyed to see that her sweet little dog was safe. It was clear that she was still upset by what had just happened, but she was ultimately very glad that her furry friend was unharmed.

“There was nothing she could have done. She is new to the building so I think she wasn’t expecting it to shut so fast,” Mathis said. “I felt terrible for her. It was an honest mistake.”

Mathis just happened to be in the right place at the right time. Luckily, he knew how to think fast and do what was right. If he hadn’t been around, this could have been a tragic situation for the poor woman and her dog. Mathis hasn’t seen her since then, but he knows that she is very grateful and that he did an amazing thing that day.

The post Man Rushes To The Rescue When A Pomeranian’s Leash Gets Trapped In Elevator Doors appeared first on iHeartDogs.com.