Man Risks His Life To Save Dogs From Burning Car 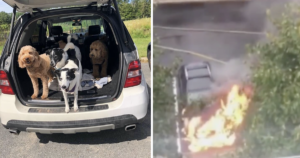 Peter Koska was on his way to work in Dedham, Massachusetts when he suddenly became a hero. As he was leaving, he spotted a burning car in the parking lot. The vehicle was up in flames, but there were three dogs still trapped inside. No one else was coming to the rescue, so Koska rushed to save them without hesitation.

By saving the dogs, Koska put his life at risk. He knew the car would likely explode at any moment, but he couldn’t leave the helpless dogs to die. To him, saving the dogs was a no-brainer, and of course, any dog lover would agree.

Luckily, the door was unlocked, so he was able to open it for the dogs. The first two dogs gladly jumped out, but the third was terrified. He stayed inside the car, barking. So, Koska had to reach inside the car to pull the dog out.

Next, he was about to grab their leashes from inside the car so the dogs wouldn’t run away. However, there was a small explosion in the car before he got the chance. It all happened only moments after the dogs had been freed. The one dog ran off in fear as soon as he heard the loud sound. Koska rushed to capture the runaway dog.

The owner of the car, who was inside the nearby apartment building, also heard the explosion. She was a dog walker who had stepped inside to quickly pick up another dog. As soon as she heard the commotion, she rushed outside to make sure the dogs were okay.

Firefighters quickly arrived at the scene to put out the fire. They said that the flames looked like they started at the front of the car and slowly moved backward. It was likely due to a mechanical issue.

“My son has a dog that we love like family,” said Koska. “So, I figured those dogs have to be family to somebody.”

The car did not survive the fire, but thankfully, all three dogs did. Janice Davis, the dog walker, notified her clients about what had happened, and they were all relieved to know that no dogs were harmed. Davis is so grateful for Koska’s kind actions. If it weren’t for him, those dogs wouldn’t have survived. He truly is a hero.

The post Man Risks His Life To Save Dogs From Burning Car appeared first on iHeartDogs.com.