Man Faces Alligator After It Bites Off His Dog’s Tail 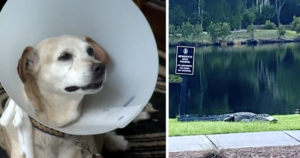 If you live in an area that’s known for having alligators, you know to be careful near water. Yet, it’s easy to forget about the risk until it happens to you. Bruce Savage and his dog Hannah, unfortunately, had to learn the hard way.

The pond near their Mt. Pleasant, South Carolina home has always had warning signs for snakes and gators. But usually, the wild animals mind their own business. So, Savage never expected a nightmare to occur as soon as he turned his back to Hannah.

Savage and Hannah enjoyed a peaceful walk one morning until Hannah disappeared. Savage said he looked down and all he could see was her retractable leash leading into the water. An alligator had grabbed her from behind and pulled her in.

“Literally, my whole system shut down,” Savage said. “My ears shut down. I couldn’t hear anything, except for myself screaming my dog’s name. I was in the wrong place at the wrong time.”

Without thinking twice, Savage rushed toward the gator and pulled Hannah out of its mouth. Then, he took off running with his beloved dog. He didn’t dare look back even for a second.

The alligator bit off Hannah’s tail, and she had a few other injuries on her backside. Savage didn’t have any injuries from the gator, but his leg got cut up by the gravel as he wrestled the creature for his dog.

Hannah is safe and healthy despite everything, but Savage thinks she’ll always be too scared to walk near the water. The Department of Natural Resources (DNR) recommends that everyone in the area should keep at least 10 feet from wetlands anyway.

“I just don’t think it’s smart to walk along there, and I don’t think Hanna will ever go near the water again,” Savage said. “You have to have a healthy respect for wildlife. Some wildlife is more dangerous than others.”

Savage called animal control to alert them of the incident, but so far, the alligator hasn’t been located. The DNR states that there has been an increase in alligator attacks in South Carolina in recent years. Thus, it’s always better to be more cautious around water.

Of course, Savage isn’t the only dog parent to fight an alligator and win. Gators can be scary creatures, but losing a furry friend is even scarier. Thanks to Savage, Hannah is still alive and well.

The post Man Faces Alligator After It Bites Off His Dog’s Tail appeared first on iHeartDogs.com.