Man Discovers His Dog and Girlfriend Dancing While He’s Away 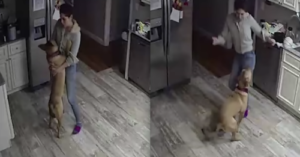 Jose Perez and his girlfriend, Keysla Mora, are very close to their beloved rescue dog, Nina. They even installed a security camera in their home so that they can check on Nina at all times. When Perez had to go on a business trip for a few days, he knew that he would miss Mora and Nina very much, and he was grateful that the security camera could keep them safe. However, little did he know, they would be having a great time by themselves!

During his business trip in Georgia, Perez received a notification from the security camera in his Connecticut home. It informed him that there was an intruder in the house! The way the security camera is set up, it’s programmed to warn Perez and Mora whenever it detects motion after midnight.

In a panic, Perez quickly viewed the camera to see what the issue was. To his surprise, it wasn’t an intruder at all. Instead, it was his girlfriend and dog having a secret dance party without him!

A video was shared of Mora and Nina dancing together in the kitchen when no one else was home. In the footage, they’re swaying back and forth, and Nina’s paws are wrapped around Mora’s waist. Then, Nina jumps down for a moment as Mora spins in a circle to some music. Then, they proceed to dance together, looking as happy as can be.

“It made my night, for sure,” said Perez.

After viewing the video footage, Perez was relieved to see that Nina and Mora were safe and sound. Of course, he’s a bit jealous that he couldn’t be a part of this exciting dance party, but he’s happy that the two get along so well, especially when they’re alone. He admits that sometimes he even feels like the third wheel when he’s with Nina and Mora.

“They are very close and are always together,” Perez said. “Nina gets very happy every time my girlfriend arrives home. Way more happy than when I arrive.”

It’s hard to guess what our dogs do when they’re home alone, but now, Perez knows for sure. He’s so grateful to have found someone that loves his dog as much as he does, and he’s happy that they purchased a camera to capture this heartwarming footage. Who knows what other interesting dance parties will take place the next time he goes out of town?

The post Man Discovers His Dog and Girlfriend Dancing While He’s Away appeared first on iHeartDogs.com.