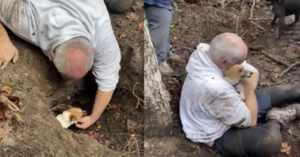 Anyone that has ever loved a dog knows that they are an important member of the family. Most dog lovers would do anything possible to make sure their furry friends are safe and happy at all times. That’s exactly how Alan Whitton feels about his beloved Jack Russell Terrier, Mitzi. He and Mitzi were just going for a daily walk when suddenly Mitzi became lost. Whitton refused to rest until he was reunited with his pup once again.

When Whitton and Mitzi were walking, the little dog got chased by a Basset Hound. She ended up escaping her dad, and she did not return after that. Whitton looked for Mitzi long and hard that night, but he had no luck.

Whitton spread the word about Mitzi’s disappearance and he continued to search for her. He was beginning to feel hopeless when he received a call from a nearby dog walker. She told him that her dog had been sniffing frantically around a foxhole, and she suspected that it could be Mitzi down there. Without hesitation, Whitton rushed to the scene right away.

When Whitton arrived at the foxhole, he brought some of Mitzi’s favorite toys with him. He squeaked one near the entrance of the hole and sure enough, he heard Mitzi whimper in response. So, he began digging Mitzi out of the hole with his own bare hands.

As Whitton was digging, some people passing by stopped to help. Some friendly people helped him dig, and one person even caught the event on video. The whole process took about two hours, but of course, it was all worth it. The reunion between Whitton and Mitzi truly was a heartwarming sight. The video became viral in no time.

Once Mitzi poked her head out of the hole, Whitton scooped her up and cradled her in his arms. In the video, he sits on the ground, hugging her tightly for a few moments. He bursts into happy tears because he knows that his sweet dog is finally safe.

After being rescued, Mitzi was taken to the vet to make sure nothing bad happened while she was away. She had a few ticks removed at the time, but now she’s as healthy as can be. Whitton has now purchased a GPS collar for her to avoid any incidents like this in the future.

Mitzi is such an important part of Whitton’s life, so he worked hard to get her out of that foxhole. He didn’t even have to think twice about it. Of course, any true dog lover would do the same for their furry friends as well.

The post Man Digs His Trapped Dog Out Of A Hole With His Bare Hands appeared first on iHeartDogs.com.