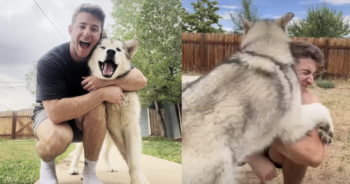 Many people love to hug their dogs, but what if your dog could hug you back? Brian Hanshaft taught his Alaskan Malamute puppy to “hug” at an early age. The first few training videos were adorable and heartwarming, but the trick didn’t end up how he expected.

Now that Hugo the Malamute is full-grown, he still hugs his human. He’s very enthusiastic about giving hugs too. The only problem? His hugs tend to be “aggressive” and more like tackles than hugs. But Hanshaft embraces his dog’s quirky behaviors.

Hugo has a big following on social media because Hanshaft posts lots of adorable training videos. The pup’s early posts showed all the impressive tricks he was learning as a puppy, such as “high five,” “stand up,” and of course, “hug.”

When Hugo first learned to hug, he would stand up on his hind legs and put his little puppy paws on his human’s chest. But now that Hugo is full-size, his method for hugging has changed drastically. To showcase the transformation, Hanshaft posted a video captioned, “teaching my puppy to hug thinking nothing could possibly go wrong…”

The video started with Hugo’s innocent puppy hugs, but when it transitioned to his adult “hugs,” it showed the Malamute tackling his human in several instances. Whenever Hanshaft crouches down, Hugo tackles him as his way of hugging him. It’s not quite as wholesome as before, but it’s hilarious!

Now, Hanshaft posts fewer training videos and more humorous ones. Most of the videos include a punchline where Hugo tackles his human at the end.

A Lifetime of “Aggressive Hugs”

Hugo’s hugs helped him gain some internet fame. Lots of people fell in love with the way he knocks over his human when trying to embrace him. Yet, the hug trick isn’t the only one that led to this silly behavior. Teaching Hugo to stand, high five, and lay on his human’s back also contributed to these unique hugs. But Hanshaft wouldn’t have it any other way.

Hanshaft revealed that he isn’t the only one Hugo tackles. If other people crouch down near the pup, he might give them an aggressive hug too! Despite most of the videos including Hugo tackling someone, Hanshaft showed that there are days when the pup refuses to hug at all. It depends on how he’s feeling that day.

RELATED: The Famous Hugging Dogs Added A New Member To Their Pack!

If you want to teach your adorable puppy to hug you, keep in mind that it may not stay consistent as they grow. However, many fans will argue that Hugo’s aggressive hugs are even better than his gentle hugs as a puppy.