Loving Rescue Dog Has The Cutest Goodnight Routine With His Humans 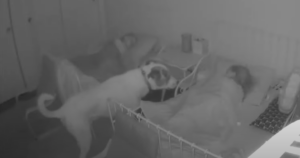 Some of the tricks that dogs learn are incredible! But what’s even more amazing is the habits they pick up all on their own. A rescue dog named Killian is a perfect example of a dog with natural talents. Most nights, he displays an adorable bedtime routine to ensure that all his human family members are safe. No one told him to do it or showed him how, but instead, it’s something he figured out all by himself.

His family’s cameras picked up footage of his heartwarming behaviors, and his mom shared it on social media. It’s the sweetest thing you’ll ever see!

In the security footage, Killian goes to each of the kids’ rooms in the house. He stops by each bed and looks to make sure the kids are there. It seems like he’s checking to see if all his favorite humans are comfortable before he goes to sleep too.

“He does this often,” said his human, Kelly Rottet. “He will wander around the house throughout the night, checking on all of us.”

When he’s not checking in on his humans, Rottet said that he finds a cozy spot for himself to sleep. Yet, it’s likely that he’ll get up again later in the night to make sure his loved ones are still safe.

Rottet insists that she never trained Killian to do this. It just seems to be a part of his sweet nature. Perhaps he thinks his role in the house is to protect his family and make sure they’re all happy and safe.

Killian is a Humble Star

After Rottet posted the footage on TikTok and Instagram, Killian quickly became a star. Of course, he’s not doing it for the fame though. It’s just a good habit that he wants to do out of the kindness of his heart. As it turns out, his family is grateful for his loving behaviors too.

“It gives us a sense of security knowing he’s guarding the house at night,” Rottet said.

With the video, Rottet also prompted viewers to guess what breed Killian is. Most people had no idea, other than the fact that he’s a sweet rescue dog. Rottet later revealed that they think he’s mixed with a Great Pyrenees and a Pit Bull. But of course, he prefers to be labeled by his personality, which is “sweet,” “loyal,” and “loving.” Everyone deserves a caring dog like Killian to check on them at night.

The post Loving Rescue Dog Has The Cutest Goodnight Routine With His Humans appeared first on iHeartDogs.com.